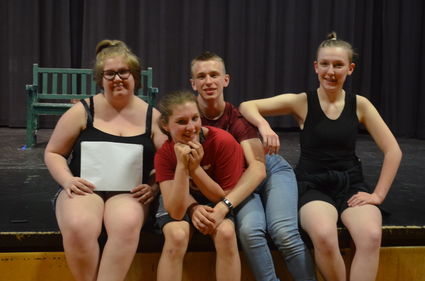 Shelby Bond and Ryan McKay-Beach who have both won best actor honors at the High School One Act Play Competition at Stageworks Northwest in Longview have roles, as well as Tyson Hjaltalin. Katie Thomason is their stage manager.

The play is not about love at first sight.

“That’s the title!” Thomason said before explaining the play, “You see each other every day at school, but this is the first time you’ve had an encounter, it’s the first talk you’ve had with each other.”

They have been rehearsing since the beginning of February.

“I wish we had a little bit longer,” Hjaltalin said. It’s his first play.

“I enjoy this class, but I don’t know how I’ll be in front of a crowd.”

Bond and McKay-Beach have their own set of problems. Between the two of them, they have five scripts in their heads.

It sometimes comes out in a bit of a jumble, a line from one or the other showing up in the midst of the play they are rehearsing.

“They get them mixed up a bit,” Thomason laughed.

But what do you do? Roll with it, McKay-Beach said.

While Hjaltalin is learning the art of acting, of trying on a new character, and learning to like it, McKay-Beach and Bond think acting is helping them learn how to work with other people and become more effective public speakers.

It’s also teaching McKay-Beach, who is in the Running Start program, some time management skills.

FYI: One character is named Jolane. The name is similar to the title of an old Dolly Parton song and has led to sudden outbursts of singing. They can’t help themselves.

The play was written by teacher Shawn Deal, who advises the drama club.

The suggested price for admission is $3 for students and $5 for adults.