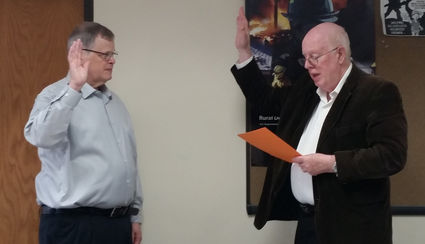 Cathlamet Town Attorney Fred Johnson, right, administers the oath of office of council member to David Olson, left. The council held a special meeting Monday to interview Olson and another candidate to fill a vacant position.

The Cathlamet Town Council held a special meeting Monday to fill a vacant seat on the council and go over needed amendments to their 2019 budgets.

After interviewing two people who applied to fill the vacancy created early this year with the resignation of Tanya Waller, the council recessed into executive session to discuss the qualifications of the applicants, David Olson and Robert Stowe.

Upon reconvening, Council Member Laura Waller moved to appoint Olson to fill the vacancy; Ryan Smith seconded the motion, and it passed unanimously.

Olson said he moved to Cathlamet about a year ago. He is retired from a career in municipal government, having headed the City of Portland's Cable Office (now Office of Community Technology) for nearly 30 years and dealing with five different mayors and varied council members in that time.

Both Olson and Stowe responded to interview questions from the council. Following are some of the questions and responses:

Question: Why do you want to serve on the council?

--Olson: "In my family, we always give back. We (he and his fiancée, Dayle Nelson) love this town and county. I have a municipal government background . . . I feel like I can give back something that I know something about."

--Stowe: "I've lived in Cathlamet approximately four years. I feel like I have a stake in the community. I want the opportunity to help serve the community."

Question: If appointed, what would you hope to accomplish, and would you run again for the position?

--Olson said that if he were appointed, he would again if he felt he were helpful and productive. He said he has a strong interest in history and would like to see the town and other entities work together to promote and enhance the area's history and recreational offerings such as walking trails.

--Stowe: "First, I would try to establish better communication with the citizens of the town. It seems to me that there's not a lot of good communication between the administration and the citizens. Second, I will run if I'm not appointed. I think the biggest thing is to get and talk to people to find out what they want as opposed to what they've been given."

Question: What do you think the responsilities of a council member are under a mayor/council government:

Olson: "I've read a lot of the Cathlamet municipal code. The legislative function is the law making function. The mayor is the chief executive officer."

Stowe: "I, too, have read the responsibilities... The council is the legislative part of Cathlamet. You are the ones who set policy and set where the town is going and what you're going to do. It's the mayor's job to do it."

There were no further questions; the council recessed to executive session; reconvened in open session and appointed Olson, who was sworn into office. He holds the position, which will be on the fall election ballot.

In other business, Acting Clerk/Treasurer Sylvia Costich presented a report of amendments needed to update the town's 2019 budgets. After much discussion, council asked her to prepare the documents needed to make the amendments.

Mayor Dale Jacobson announced that Public Works employee Terry Vik will soon retire; a party to celebrate his retirement and 75th birthday will be June 2, 2 p.m., at the Norse Hall on Puget Island.