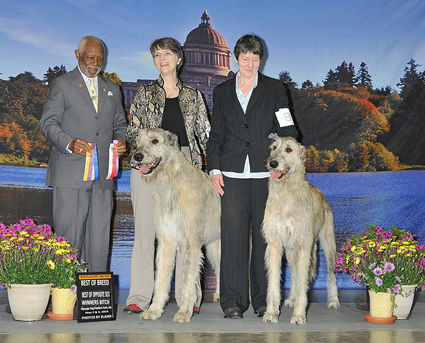 Misty Rivers Drifter O'Quinn had a very good weekend at the beginning of May. At a four day show event in Elma, sponsored by the Nisqually Kennel Club and Olympia Dog Fanciers Association, Drifter won Best of Breed in the Irish wolfhound division on all four days. He is shown with his sister, Sorcha Chimera O'Quinn of Misty River, who won Best of Opposite Sex in two of the four shows, Judge Eugene Blake, handler Julie Brown, and Sorcha's owner/handler Mary Horton. Two of the shows were major events, so Drifter is past the halfway mark to his AKC Championship in just one long weekend. He was also 6th in AKC's national speed records at 25.2 MPH 2019. Photo by Elaine Rushton.