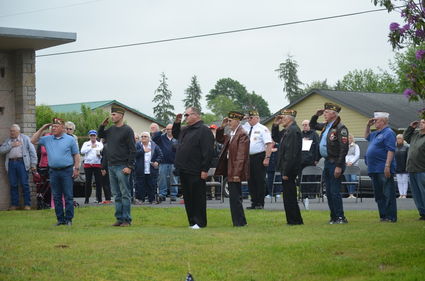 Last Thursday, 44 John C. Thomas Middle School students were given a lesson in service, first learning about Memorial Day from veterans, and then spending a little time marking the graves of local service men and women who gave their lives in service to our country with flags. It's an annual event orchestrated by teacher Eric Hansen. 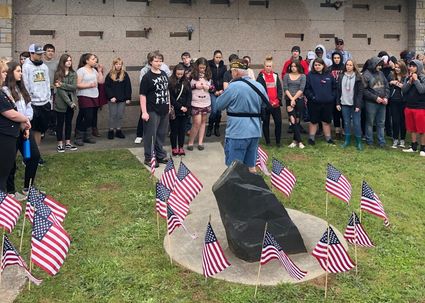 On Monday, Wahkiakum residents and veterans took a little time out of their day to honor those who died while serving their country. Bill Tawater addressed the crowd, noting: "In cemeteries across America and around the world today, people will pause to spread flowers on the graves of those lost in war, But today, Memorial Day, isn't about the number killed, it's about the sorrow we feel at their loss...to be thankful that such brave men and women have lived, and to pay tribute to those heroic patriots who bravely rose up and fought for something greater than themselves, protecting a home to which they never returned."

Top: Wahkiakum veterans salute the flag during a Memorial Day service at Greenwood Cemetery on Monday. Photo by Diana Zimmerman.