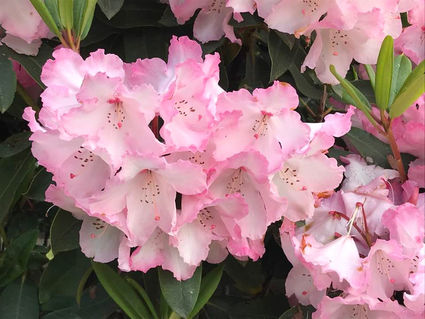 There are only two naturally growing rhododendron species in Finland; the rest have been brought to Finland. Rhododendron Lapponicum grows in northern Finland in only the remotest corners of Lapland. Rhododendron Tomentosum is very common everywhere in Finland, growing around bog margins, forming wide stands that are covered with white flowers in the summer. The robust fragrance of its leaves is well recognized to all Finns, and the toxic leaves have been used traditionally as an herbal medicine, such as against flu.

As a result for the love of flowers, Rhododendron Naselle became a hybrid from rhododendrons "Big Sam" and "Lems's Cameo" produced in 1987 by Knappa, Ore., resident James Elliot. These beautiful rhododendrons can be seen all over Pacific and Wahkiakum counties. It is no small wonder that the Finns would adopt these flowers and make them a permanent part of the landscape of Naselle, Salmon Creek, and Deep River. Rhododendrons have always been indigenous to the area, and the Chinook tribe, who were the original people of Deep River, were aware of these beautiful flowers.

In addition to the Chinook tribe, the Puyallup, Chehalis, and Nisqually tribes also lived in Wahkiakum County. They were gradually displaced by early white settlers who were occupied in the local fishing and lumber commerce. The Chinook tribe subsequently moved upstream to the Altoona-Pillar Rock area to continue with salmon fishing. The early pioneers' assertion is that the local native Americans called the slough Alamicut, which means deep river.

Deep River was first settled by Finnish immigrants in 1875, and by the 1890's it was a blossoming logging settlement with a post office. The Deep River Post Office was in use from 1887-1975 with Mrs. Mary E. Ferchen as first postmaster on January 13, 1887. Deep River was built on pilings because of the Columbia River tides, which came in twice a day. Today only the river pilings remain. The sidewalks and roads constructed of planks were raised six feet above high water. In 1917 it had two stores, the Shamrock Hotel, a coffee shop, a community hall, a school, Pentti's Westend Pool Hall, daily boat service to Astoria, a logging railroad, and the Deep River Holy Trinity Evangelical Lutheran Church. The community sauna was located between the hotel and pool hall. This is the small town which became the center of the logging history in the early 1900s because of its location on the main artery of transportation.

As of the 2010 census Deep River has a median age of 63. The Census Designated Place had a population of 202 as of July 1, 2018. Deep River ranks in the lower 25 percent for population density and diversity with a total number of households at 91. Deep River is considered a ghost town to a certain extent. The Deep River Pioneer Cemetery that was established in 1889 is a somber reminder of the great sacrifices these hardy Finns made. They are gone, but not forgotten. At one time there were over a thousand Finns in the area and only four were non Finns. Today approximately 27 percent of the Naselle to Grays River people are descendants of the Finns who first came to the area. The graves are there as a testament. They are gone, but the beautiful Rhododendron Naselle is still here to remind us of this bygone era. I am happy to say that in the Westend there are still Finns and flowers.

Starting on June 15 there will be from noon until 2 p.m. at Johnson Park in Rosburg, a summer of fun for your children. There will be crafts, activities, games, produce, and a healthy lunch. It is all free. For more information call 360-465-2310 or come by on June 18 at 10 a.m. to learn more. This is for children of all school ages. This is to build healthy children for a better community.

This is to remind everyone that this is an opportunity to get out and meet the community and have some fun. Set your calendar for June 25 from 5-7 p.m. and go to the annual Community Picnic and Potluck, for all ages, at the Naselle Timberland Library at 4 Parpala Road in Naselle. Hamburgers, hotdogs, and chips provided. Please bring a dish to share and a chair or blanket to sit on. Participate in a silent auction in the library from June 4 to June 25. Sponsored by the Friends of the Naselle Timberland Library and generously supported by Okie's Select and Johnson's One Stop. 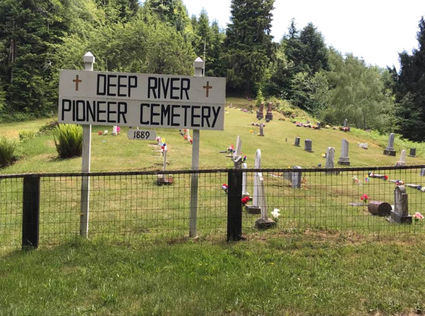