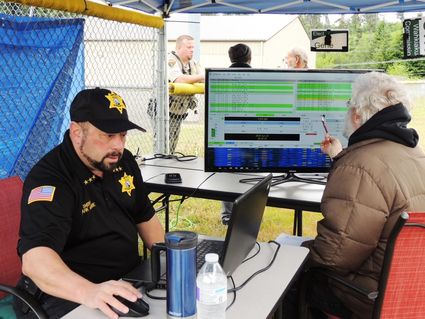 In the biggest "virtual get-together" of their year thousands of amateur radio clubs from across the country communicated last weekend via radio during a simulated major disaster. Our local club, N7WAH, pretended as if there were no cell service, no phone service, no fuel for generators or vehicles, and no mains electricity. We used batteries and solar power only. We gathered on one of the ballfields at Wahkiakum HS, setting up Friday evening before the "emergency" then operated for 24 hours straight from 11 a.m. Saturday to 11 a.m. Sunday. Like all other clubs our goal was to see how many other stations we could contact. We won't know our official score for several months since the Amateur Radio Relay League must verify our contacts with all other club contacts, but our preliminary calculation puts us ahead of last year's fourth-place national score by about a thousand points.

Field Day has two more goals. One is how quickly and efficiently can each team plan for, set up, operate, problem-solve on the fly, and take down its equipment. This went remarkably well. We added a new component this year: A satellite antenna station designed and built by Richard (KC4ONA), Bob (WB6AGE) and Steve (K7SH). Richard and Mark (AE6DI) were able to make our contact about 1:30 a.m. on Sunday morning - if you heard some whooping at that time that was us, celebrating our club's first satellite contact, ever.

Two other major highlights of the weekend were a young visitor from Texas (Hunter) making 20 contacts on the GOTA (Get On The Air) station. and Sheriff Howie getting three returns at once when he sent out a CQ, also on the GOTA station. This is like casting out your fishing line and having three salmon bite the hook at the same moment. In the ensuing mayhem Mark was heard to calmly say "I sure wish fishing was like this." 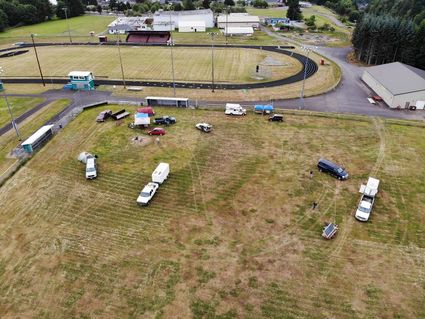 The third goal of Field Day is to invite non-hams to experience what Amateur Radio is all about and what all it can do. We had mixed results on this goal this year. On the one hand we had more government officials visit than ever before. We had more visitors in general than ever before. We had greater participation at our GOTA station than ever before with seven folks making 102 contacts as compared to 60 last year. We had great food that was appreciated by more people stopping by to nibble than ever before. On the other hand, we had several visitors who wanted to try amateur radio on our GOTA station that didn't get the chance. We had our primary stations going so hard on making contacts and so few "guides" available that we didn't do a good job of explaining everything that was going on, and everything that Amatuer Radio can do for the community it is involved in. We will work to improve this for next year: June 27-28, 2020.

In the meantime we invite everyone to our meetings: every Tuesday morning at 9:00 a.m., except the second Tuesday of the month, at the River Street Meeting room in Cathlamet. On the second Tuesday of each month we meet in the evenings from 5:30 p.m. to 7:00 p.m. at the same location, often with presentations of general public interest.