Inside story from Society for Creative Anachronism 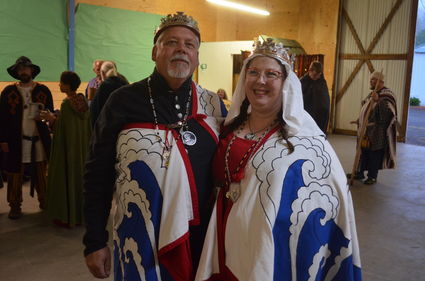 The Society for Creative Anachronism welcomed the new leadership at their event last weekend in Skamokawa. Baron Duncan and Baroness Moira, seen here, stopped by a celebration of the outgoing barony on Saturday night to present gifts.

On Saturday in the evening mist, I stood with two women. I was outside the youth barn at the Skamokawa Fairgrounds, dressed in jeans and a rain jacket. They were in the Shire of River's Bend. One wore a crown and genteel garb from another time, the other in more rugged apparel, apropos of 13th century Scotland.

"We're a bunch of weirdos," said one, a little defensive.

I confess, I didn't completely understand the Society for Creative Anachronism, but I absolutely admired the members' wholehearted willingness to embrace their passions and make it a lifestyle.

I've got room for that.

Besides, let's face it. Who isn't a little weird?

I like kung fu movies, Star Trek, and opera. I've read every book written by Louis L'amour and I've been listening to hip hop since I was 18, though most of my favorite music comes from the 30s and 40s. If old episodes of The Incredible Hulk are on in the middle of the night, I'll stay up and watch them. I'm forever asking non-native English speakers how to swear in their language. Caterpillar season is really hard on me, because I will do my very best to avoid running over those little creatures when they cross the road. In my twenties, I watched a campy Australian movie, Strictly Ballroom, more than 20 times. And those old fellers on Last of the Summer Wine are my spirit guides. Which reminds me, I bought some roller skates recently and if someone could tell me where I might use them, that would be nice.

Really, that's only the tip of my own personal oddball iceberg. My dad likes to tell me I'm weird. I've learned to simply grin and thank him. It tells me I'm doing something right.

Life is too short. Find your fun where you can. And maybe if you're lucky enough, your search will take you all the way to the Shire of River's Bend.

Inside the youth barn, a crowd was enjoying food and drink, celebrating the outgoing Barony of Stromgard. I was the only person in the room dressed in contemporary clothing.

Van Carter, or Sir Justin de Leon, discovered the Society for Creative Anachronism when he was 12. He's 49 now, a titled knight and a member of the Order of Chivalry, as well as a master at arms.

"There are four orders of merit," Carter explained. "There is the Order of Chivalry, which are titled knights; the Order of the Pelican, who are dedicated to the service of the organization, and frequently the backbone of the group; the Order of the Laurel, who are experts in arts and sciences; and the Order of Defense, who are masters in period rapier."

Beckett, or Thora Jorsalafari was recently apprenticed to a Laurel. She's studying weaving.

"I named myself after a crusader from Sweden," Beckett said. "Jorsalafari means Jerusalem bearer. I'm a Christian and I wanted my persona to be a Christian as well, which is unusual because most people in Scandinavia in the middle ages were followers of the old gods. If we were to discuss my persona I would be an early convert to Christianity."

She may have created a persona, but she was simply creating herself.

"The SCA organization is 55 years old," Carter said. "It started off as a party to celebrate things that weren't the 20th century. As it evolved it began focusing primarily on Europe and then expanded to encompass all the cultures on the planet before 1600."

"This is our Barony's event," Beckett told me. "We are the Barony of Stromgard. We are local to the Vancouver area, Battle Ground, Washougal, Camas. Our kingdom is called An Tir, and it includes Oregon, Washington, parts of Idaho and British Columbia."

According to Beckett, there were people from multiple baronies in attendance.

Carter was 12 the first time he witnessed a demonstration of the pageantry and fighting at an event in Denver.

Beckett only got involved a couple years ago, but has known Carter for a long time. Her boyfriend, now fiance, and a friend encouraged her to give it a try.

"It sounded fun," Beckett said, "so I thought, why not go and see what it's all about. I kind of jumped into the deep end. I'm not an artistic person, but I'm weaving and sewing and doing embroidery, all of which I learned from people in the SCA. It's really been an amazing journey."

Members frequently use a mix of historical and modern techniques to practice whatever crafts intrigue them.

For instance, Beckett had made almost everything she was wearing, replicated from a particular period in Sweden, even weaving some of it.

She's even written a paper about her work.

"The arts and sciences gets a little crazy," she laughed. "Some people are published online. We have competitions and you are graded on your accuracy."

"One thing that we love about the organization is the focus on history. If you are a history buff, you could be researching the creation of mead, historical fighting, clothing," Beckett added. She noted that she had recently done a demonstration of her weaving and spoke at a museum in Seattle about Scandinavia.

"You get a lot of opportunities by learning about history and sharing it with others," Beckett said.

"Because the organization is a social and historical organization, we practice a lot of social learning.

"You might notice that some of the armor doesn't necessarily conform to period armor," Carter said. "Some of it is creative, it is fun to wear, or easier to move in than period armor."

Our conversation came to a halt when the new Baron and Baroness called for attention and gave gifts to the outgoing power couple.

"They are required to go to a lot of events," Beckett said of barony, "as well as business meetings every month. It functions much like a nonprofit."

Beckett is a consultant for a medical device consulting group. Members also include doctors and high ranking members of the military, according to Carter.

And lots of teachers.

"You get as much out of this as you put into it," Carter said. It very much could be a major part of your life or something you do occasionally on weekends and everything in between."

Outside, it was still raining.

The first baroness of Stromgard, Duchess Miranda, or Miranda Brothers, is a teacher in LaCenter. 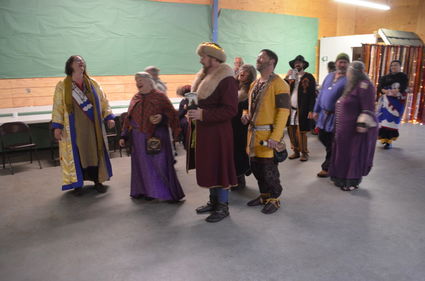 "There is something for everyone, opportunities to learn skills you never imagined," Brothers told me as we stood together in the twilight, I in Skamokawa, she in the Shire of River's Bend.

I don't think there is anything weird about that.

Still, Brothers laughed when I asked how she met her husband, who works across the hall from her. It wasn't while teaching and it wasn't at an SCA event.

"We met at WSU," she said. "If you told me then I'd be doing this now, I would have said you were crazy."

I said it before and I'll say it again. Life is too short. Find your fun where you can.

Thank you for your article. It gives a nice picture of the SCA from an outside point of view. I also have been playing in the SCA for about 30 years, and I live in the Shire of River's Bend (Cowlitz and Wahkiakum counties). We will be having our annual William Tell Archery Tournament at the Wahkiakum County Fairgrounds again in August. We really enjoy your site, and having the covered arena as an archery field is a joy. We will be there the 4th weekend in August. Maybe we will see you there.

Well written, Diana. And your weirdness is why we love you.