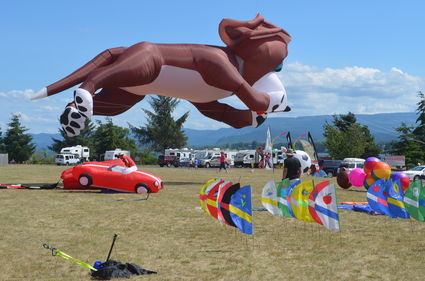 Kites filled the sky in Skamokawa this weekend, as enthusiasts returned to Vista Park to take advantage of the sun and wind and as they said repeatedly, a lovely location.

This community of kite lovers hail from many places, and travel to many places to practice their craft. They not only love to play in the wind, but they delight in the art of the kite, appreciating the designs, colors, craftsmanship and sometimes the humor, of kite makers. And making new friends.

Some of them are kite makers, including Brian David of Poulsbo. He and his wife, Debbie, came to Wahkiakum County for the first time last year to teach kids about kites and help them make their own. They were back this year to do it again. They found it was a little slower this time around; they’d made about 35 kites as opposed to 135 last year.

Like many other members of the kiting community, the Davids are trying to reach out to younger generations to keep the love of the kite alive.

Ray Bohn and Kathy Barnes are siblings from Long Beach. He’s been flying kites for decades, but Barnes took it up four years ago.

Their friend Susan Tislow of Renton confirmed it with her ground display, a collection of ducks with all kinds of designs, painted by friends and artists and kite makers. She’s been involved in the kite community for 24 years, and this was her third year in Skamokawa.

Brent Williams of Vancouver, British Columbia, was visiting Vista Park for the first time. He got involved in kites five or six years ago, and spoke warmly of all the people he has met along the way.

“They are a kind and generous community,” he said.

Richard Hurd and Phyllis Gribbin had traveled down from Olympia for the event. The two fly stunt kites. Richard has been flying kites for more than 30 years, outdoors and in, including the competitive sport of Indian fighter kites. 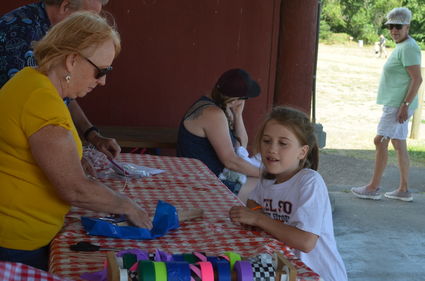 He once traveled to India with a beautiful Indian fighter kite he planned to give to the prime minister, Gribbin said. In a busy city, he climbed stairs to the top of a tall building and got out the kite to fly it. A moment later, before he’d even had a chance to take in the scene, his kite was gone. An alert Indian youth, down on the street below, had seen the kite, and used his own kite to cut it down.

Their friend, Mari Daniels, stood nearby. She flies stunt kites in formation for Team Revolution, and was at Vista Park with Gribbin, Hurd, and another friend to practice their craft.

The Kite Festival will return to Skamokawa in September. Come! Bring your kids, learn to make a kite and fly one, and make some new friends.