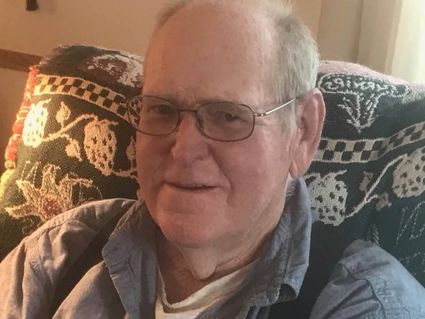 It is with sadness to announce to those of you who knew Dean Badger that he passed away in Yuma, Arizona, of a heart attack at the age of 80. He was my neighbor and one of the first in the county to befriend me. On my arrival here, Tom Zimmerman and his brother, John, and John's three boys, helped me move in next to Dean Badger. Dean welcomed us with apple pie a la mode. This was my first encounter with Dean.

The Badger family has had five generations in 100 years. Raymond Badger, Dean's first cousin, is the last of the Badger clan to live in the county.

George W. Badger (1844-1928), aged 84 years, was born in Ionia Township, Ionia County, Michigan, died in Portland and is buried at the Grays River Grange Cemetery. He was in the 6th Michigan Cavalry Company F. from Grand Rapids organized in May 1862. The 6th Michigan throughout the Civil War experienced seven officers and 128 enlisted men killed in action or mortally wounded and 251 enlisted men who died of disease, for a total of 386 fatalities. He was at the battle of Gettysburg and many other battles.

George Badger would return home after the war to Ionia Township where he would meet and marry Sarah A. Raymond (1847-1881). They had two sons, George Edward Badger (1873-1944) and Frank Cyrus Badger (1880-1966). Sarah died at age 33; it is not known how she died or whether or not he remarried; however, he did move west to Aberdeen with his two young sons and later to the north coast of Oregon before settling in Clatskanie.

George's son, Frank, Dean and Raymond's paternal grandfather, began working as a logger when he was just 16 years old and went with the logging company to log the Hull Creek area where he met Ida May Sorenson (1884-1979). Frank and Ida May married in 1902. They would eventually have enough acreage to have their own dairy farm that was called Lily Pond Creamery on Loop Road in Grays River. They had a girl named Hazel Madeline Badger Elder (1907-1995) and two boys, Harold Edwin Badger (1911-1989) and Arthur Raymond Badger (1907-1972). Art, Dean Badger's father, died of a massive heart attack after going hunting. Dean had an older brother who died at a year old almost a decade before Dean was born.

Harold had several children, one of whom is 86-year-old Raymond Franklin Badger who has resided in Cathlamet for the last 17 years. He worked for Weyerhaeuser for 28 years. I had the honor and pleasure of listening to him as he recounted the early days living in the Westend. He explained to me how his great-grandfather George W. Badger was an inventor of sorts and had a machine shop in the building that is now Duffy's Tavern in Grays River. The genius that was in George was passed on to his great-grandson Raymond who made a replica 1905 Ford from a picture he saw and used plywood. He used a John Deere riding lawnmower engine to power it. He also made an electric cannon for Bald Eagle days. It shoots a long stream of water powered by a windshield washer pump. I felt like a small boy again looking at these marvelous toys created by a brilliant man who still plays like a young man. All the other Badgers have move out of the county. He is the last Badger.

Independence Day with the Zimmermans

For over 10 years, John and Bekalyn Zimmerman have celebrated Independence Day by throwing a picnic for their community of friends. They initially just had family and they added a few friends until now there is a large crowd of which I knew a few. It was a pleasant afternoon with good food and the weather was cloudy but not cold. I did not stay for the fireworks, but I heard lots of it later in the evening. 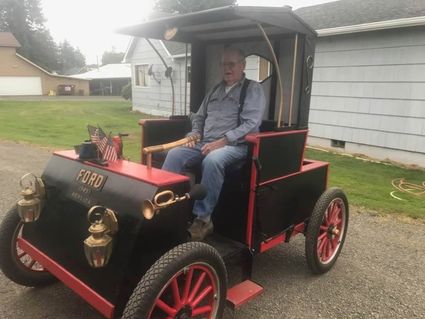 Dean Badger and his 1905 Ford replica.

For those of you who may wonder why some veterans do not like watching the fireworks, it is not because they are not patriotic; it is they saw enough fireworks in the military, and it brings back memories they would rather forget.

I wonder how many young people have no idea of the Revolutionary War with Great Britain and the consequences of the early patriots' actions that would be deemed traitors against the Crown of England.

I was in awe when John showed me the artwork his children had done with rocks from the river. I no longer look at rocks the same way. Anna Zimmerman painted a picture of a horse on a rock and gave it to me. The Zimmerman children also painted other rocks that were gifts to the guests who wanted to take one. This is a very talented family and a real pleasure to be around. Independence Day takes on a new meaning when gathered with friends and family just to enjoy each other's company.