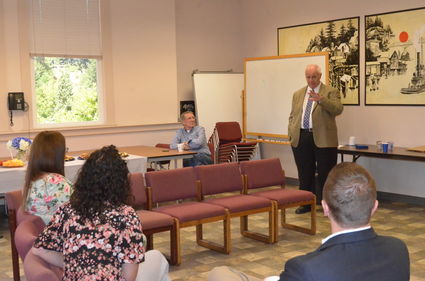 Photo and story by Rick Nelson

Washington State Treasurer Duane Davidson visited the Wahkiakum County Courthouse last Thursday to meet officials and citizens and comment on issues with which his office must address.

The state's pension system is in good shape, Davidson said, and he resists efforts to see the legislature access the fund to make loans for other uses.

The $100 billion fund has earned annual interest at 8-10 percent, over the last 10 years he said.

"Should it be loaned out to a school district for building construction and be repaid on a 2-2.5 percent return? It doesn't add up; it's risky; the pension liability doesn't go away."

The legislature's response to the state Supreme Court's McCleary Decision, which required improved and equal funding for public schools, was admirable in its effort to improve the quality of education in public schools, but the legislature used money from the state's Rainy Day Fund, drawing that emegency fund to a "historically low balance," Davidson said.

Legislators are often conflicted, he said, making it hard to achieve the best solution for all parties.

"The trouble is that they're primarily concerned about their districts," he said. "I was able to handle county commissioners [as a county official], but legislators refuse to listen."

Davidson said a major concern for him is the state's debt, eighth highest in the nation.

"We have too much debt going into projects that don't necessarily benefit the entire state," he said.

Davidson also commented that the state's system of sales taxes is here to stay and won't go away, even if an income tax were adopted.

"What scares me is the idea of a state income tax," he said. "If you have a history of sales tax, they will never be eliminated with an income tax."

According to the state treasurer's website, "Davidson was elected as Washington’s 23rd State Treasurer in 2016. Prior to that, Duane was elected to four terms as Benton County Treasurer, serving from 2003 – 2014."

Representative Mike Pellicciotti (D-Federal Way) has announced he will challenge Republican Davidson in 2020.