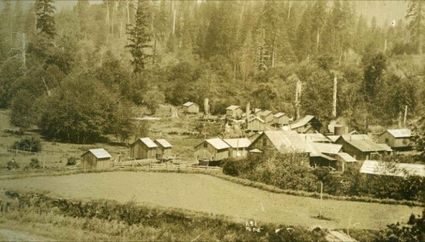 Saldern Logging Camp. The large building in the foreground is the foreman's house.

Through the Fog of Time Part I

Imagine yourself driving east on State Route 4, and as you cross the Grays River bridge just east of Shannon Road, when a sudden fog immerses the car and the car comes to a halt. You get out of the car and notice the fog beginning to clear just west of Fossil Creek Road on the west side of the KM Mountain. Instead of seeing the highway, you see the Saldern Logging camp busy as ever on the south side of where the highway was. You realize you have gone back to the late 19th century through the fog of time. This would be the future sight of Hjalmar and Mabyn Klint's farm. This is where the logging camp foreman's house was built in the late 1880s and would be their future home. You begin to understand why many farms lost their land to the highway.

When logging companies cleared timber, one of the first things they did was to clear a path for the railroad to come in. When this was done, they began to clear-cut each side of the tracks not only to get the logs to market but also to clear an area for their logging camp. In the case of the Saldern Logging Company, they would finish clearing the area and move everything including the camp housing up the KM Mountain. A good portion of the highway today on the KM was formerly logging roads and train tracks. After the area was cleared, much of the property was sold by the Saldern Logging Company as homesteads. It made more sense to the highway builders to use the existing roads and former train tracks as part of the new highway. It was much cheaper than clearing new land, especially because most of the farms had cleared their respective stumps from the land to accommodate agriculture and cattle.

Hjalmar Hansen Klint was born in Jamjo, Sweden on May 6, 1873. His father died when he was only three years old, and he lost his mother when he was 15. When he was 17, he came to the United States. He had two half-brothers, Antone and John, who were close to 20 years older than he was, and they were homesteading near each other on property that had belonged to the Saldern Logging Company. John owned land on the south side of SR 4 and Antone had land on the north side near the Satterlund home. The Klints bought the home and property from the Saldern Logging Company, and it was remodeled by Hjalmar and Mabyn in the 1930s around the time the highway came through and split the property.

The present route of SR 4 was codified into the state highway system in 1915 as State Road 19 connecting Naselle, Cathlamet, Longview, and Kelso. The highway was paved with the macadam method between Johnston's Landing and Grays River and between Skamokawa and Kelso by 1931. Macadam is a type of road construction where single-sized crushed stone layers of small angular stones are placed in shallow lifts and compacted thoroughly. The remaining gap was constructed of gravel by 1933, and the entire highway was paved by 1939.

According to Janine Klint Davidson, granddaughter of Hjalmar, "It was once a logging camp. My dad grew up in the house there, which is in this old photo. It was the camp foreman's house. It's the one with the bay window on the end...That whole valley was homesteaded by my relatives...That was my grandparents' farm. The highway came through in about 1938 or 39 and cut their farm in half. The highway used to go along Shannon Road and went between the two farms. There used to be an old abandoned bridge upriver from the old highway. In the 1970s Joe Florek tore the old highway bridge out and assembled it on his property out the Elochoman. It is still out there." Janine also said that the highway separated the north field from the south field, so the highway department built a tunnel under the highway to allow the cattle to pass back and forth.

Hjalmar was hired by L. Saldern and worked as a steam donkey engineer. The Saldern Logging Company had 60 employees and they were cutting 50,000 feet per day. Hjalmar and Mabyn were married in 1924 when he was 51 and she was 30. They would raise their children George, Marie, and Kathleen. To be continued.

Coffee with a Cop

First of all, the community can thank the Rosburg Store, for not only allowing the gathering, but for providing snacks for the participants, although many bought their wonderful breakfast creations. This was a time when Sheriff Mark Howie explained that crime has gone down in the county substantially compared to last year. The sheriff's department has a complete staff of field deputies that has three shifts with overlapping schedules that complement each other. The new deputy fresh out of the academy will perform three months of field training with an experienced officer, rotating to a new senior deputy every month. Both the Cathlamet and Naselle schools will have a school resource officer on hand at each school at appointed times for school safety. The one thing that the sheriff explained was the need for the community to have their respective 'Neighborhood Watch' groups. When these are in place with the appropriate signs, burglaries decline. Those interested in forming a Neighborhood Watch group, contact the Wahkiakum County Sheriff's office at (360) 795-3911. 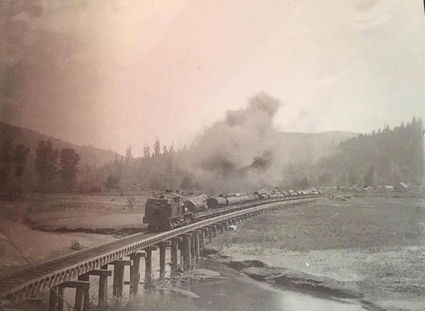 Just to let you know that the Dress a Girl monthly meetings will start again on Sept. 3 at 10 a.m. at Johnson Park in the Sewing Room. Monthly meetings will continue on the first Monday of the month at 10 a.m. Labor Day is first Monday so meeting changed to first Tuesday instead. Dresses are being collected to send on a mission trip to Africa. Patterns and fabric will be available. For more information contact Johnson Park.

Musicians will perform traditional Irish music on Friday beginning at 7 p.m. a Duffy's Irish Pub in Grays River. These musicians come from Oregon and have been camping In Skamakowa and will be here for one night only. There is no admission fee.