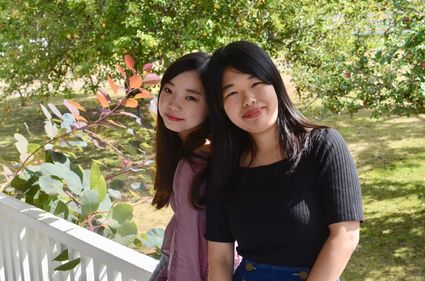 Ayaka Suzuki and Karin Koike are college students from Tokyo currently being hosted by Connie Christopher of Cathlamet.

Cathlamet resident Connie Christopher has long considered hosting an exchange student, but an entire school year was just too much while she was still working.

Instead she decided to try hosting Japanese students who participate in a two week exchange program through Lower Columbia College. She had such a good experience last year that she decided to do it again.

"I love meeting people from other cultures," Christopher said. "Plus young people are so interesting and fun to be with. I enjoy trying to see the world through their eyes."

Koike is 20 and Suzuki is 19. They have been good friends since junior high, and are now in their second year of college.

Koike is studying Japanese literature and plans to teach at an elementary school one day. Suzuki is majoring in communication culture and English. She wants to be a secretary.

The cities and towns of southwest Washington are a far cry from metropolitan Tokyo, which Suzuki describes as beautiful and dirty.

Tokyo has many cities, Suzuki said. The two live about 30 minutes apart, if traveling by train. Koike is from Katsushika and Suzuki is from Minato City.

They attended Atomi Junior High together, before moving on to Atomi High School, and now Atomi University in Niiza, Saitama, Japan. Saitama falls outside the Tokyo city limits.

There were so many Japanese people in Hawaii, it felt comfortable to Suzuki, but here the two have to practice their language skills more often, which is one reason for the exchange program at LCC.

During the students' two week visit, they enjoy trips and activities with their hosts on the weekends, but spend the week in the classroom practicing English, studying leadership skills, or out in the community sharing Japanese culture with local youths.

It was the idea of volunteering in America that really appealed to Suzuki, and she's had fun sharing Origami with teenagers in Longview.

America is big, they both agree, and most of the people they have met have been very kind.

Suzuki and Koike have discovered that food portions are enormous, and they are shocked at the amount of waste they see. Their culture requires them to eat everything on their plate. It would be impolite to do otherwise.

Suzuki likes chicken strips and french fries, it turns out, and Koike likes a good hamburger, if it's not too big.

Suzuki has a younger sister named Riyo, who is 12 and Koike has an older brother named Shunsuke, 25. He is married and has a son.

When asked if she liked playing with her nephew, Koike, who was the shyer of the two, lit up and pulled out pictures.

Koike played soft tennis in high school, and enjoys comics and movies. Suzuki likes to play the guitar and sings, and their favorite band, without a doubt is AAA or Attack All Around.

They've been to Astoria, and climbed the Astoria Column with their host family. They went to the kite festival at Long Beach. They also went to Portland a couple times and were headed to the Gorge on Sunday. When the program ends, they will make their way up to Seattle for a few days before flying home.

"I have learned lots more about Japan and it's culture, plus figuring out how to give them a positive experience is a fun challenge," Christopher said. "I strongly encourage others to try it. Two weeks is just the right amount of time. The LCC staff are very supportive, providing lots of background information on the students and help with understanding our cultural differences. Plus they are just a phone call away if anything comes up."

"A friend told me it was my contribution to world peace," she added.