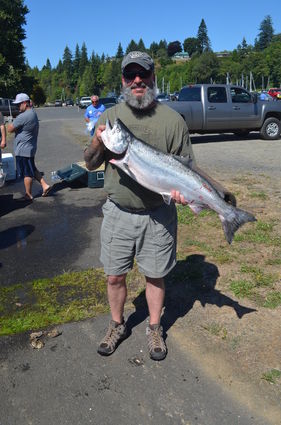 It was a glorious day for fishing on Tuesday. It really couldn't have gotten much better for organizers Willie Johnson and Doug Martin, or anyone lucky enough to be involved in the fifth annual Warriors and Widows Salmon Derby.

A crowd of captains and servicemen had gathered around the fish cleaning station at the Elochoman Slough Marina at 2:30 p.m., as the last of the participants began to prepare their fish for weigh-in, which ended promptly at 3 p.m.

Chris Giang, Army, from Tumwater, hadn't had any luck that day, and was trying to talk someone, anyone, into sharing fish heads.

"My wife loves them," he laughed.

Chris Turnbull, retired Army, of Yelm, was feeling pretty good about his chances of winning the derby.

"We got some monsters today," Turnbull said. He asked one of his new friends to guess the weight of his fish.

Unfortunately for Turnbull, his friend overestimated.

"We had a great time," he said. "It would have been nice to catch a fish but it was sunny, it was nice. It was all about having a good time, talking a little bit of smack, and watching other people fish..."

"...And meeting new people," Turnbull continued for him. "That's the best part. Guys that served alongside you, but you never met."

"I think that's one special thing about the veterans," Hamard continued. "It doesn't matter what you did, what you've done, we just have that community. It makes it really good to participate in events like these where we know where everybody is coming from."

Jeff Mason, who runs Fish'n Trips for Heroes, has been coming back every year to support the event that the late Bud Mickelsen started here in Cathlamet to honor servicemen and women, as well as Gold Star Families, and local first responders. 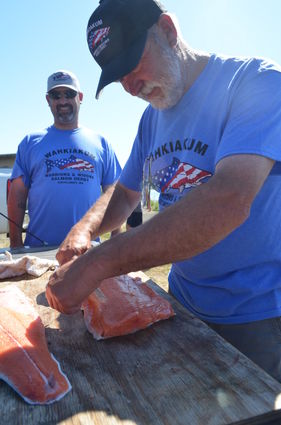 Eric Tucker, Army, looks on as his captain for the day, Joe Edwards, fillets his fish. "I caught the captain's 14 pounder," Tucker teased.

"There is more fish this year than years past and they are just gorgeous," Mason said. "There are a lot of smiling faces here. The whole operation has never been smoother. They've got this thing dialed in, Willie (Johnson) and Doug (Martin). I come because the cause is near and dear to my heart and secondly, as an honor to Bud. He and I started this. It is in honor of him."

Organizers and volunteers have returned every year to make this event go right. There's a big salmon dinner on the first night of the two day event, and bagged lunches for everyone who spends the day on the river fishing. Someone makes a run to Longview for coffee, pizza, or donuts for everyone. They look for donations, and prizes, recruit captains, handle weigh-in, sell T-shirts, clean up and more.

It's a big operation and it's done with a lot of heart to provide a few hours of happiness to people they've never met, but still value--the men and women who serve our country and our local community.