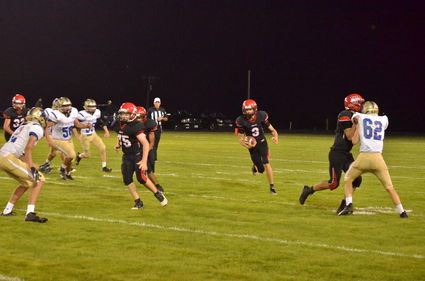 Wahkiakum's Jake Leitz follows his blockers for a good gain in the Mules' loss to the Adna Pirates last Friday.

The Adna Pirates showed why they're ranked fourth in the Associated Press Class 2B state rankings with a 39-21 win over the Wahkiakum Mules last Friday in Cathlamet.

The Pirates scored four touchdowns in the first quarter and two in the second to lead 39-6 at halftime.

The Mules scored on a long pass play from Kaden Anderson to KC Berry at 3:31 of the first quarter. They added two more scores in the third quarter with Braxton Johns scoring on runs of one and 20 yards. Johns was the Mules' leading ball carrier with 44 yards on 14 carries.

The schedule doesn't get any easier for the Mules. They head to Onalaska this Friday to take on the third ranked Loggers.