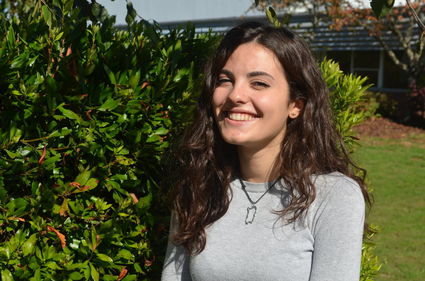 Exchange student Asia Taccori of Sestu, Italy, located on the island of Sardinia, thought she was from a small town until she came to Cathlamet.

Story and photo by Diana Zimmerman

Asia Taccori, an exchange student at Wahkiakum High School this year, knows two things for sure right now. One, it's cold. Two, life is as good as your attitude.

She is cold because an early chill has set in, but she's also cold because she's 17 and she has spent her entire life on an island in the Mediterranean Sea. Taccori is from Sestu, which is on the southern end of Sardinia, in Italy.

Taccori got involved in the exchange program because she wanted to travel.

"I want a job that lets me travel," Taccori said. "The world is so different and so big that I want to see everything. But to see everything for one week is not like living there. I wanted to know what it was like to live in America, because of the American Dream. Everyone has that."

The American Dream isn't what she expected so far, but she only had movies to go by, and they all seemed to be set in big cities, in big schools, with lots of students.

"I love that everything is new for me. In my school in Italy, you just stay in class and the teachers come and go. I have classmates, all my age, for six hours, all in the same place," she said.

It was an adjustment to move from classroom to classroom, but she's finally got it down. And she has discovered that she really likes the more informal interaction with teachers that she has found in the states.

"Here I can ask anything," Taccori said. "You can be friends with teachers. I love that."

Her favorite teacher is Mr. Cox.

"Not because he's easy," Taccori said. "It's probably the most difficult thing I've ever done. But he is so nice with me. I always thank him because I'm not used to having teachers like this."

Taccori is on the Mule varsity volleyball team and is proving to be a force at the net.

"You can really see that they know what a team is," Taccori said, "It's beautiful."

She always thought Sestu was a small town, but she feels a little bit differently about it now.

"In Italy, you can go out and you don't have a curfew," she said. "You can go dance in the discos, and stuff like this. When you are 18 you can do anything."

Taccori will have one more year of high school when she returns to Italy, where she is studying marketing.

"I was so scared," Taccori said of this adventure. "I think this can be the most beautiful thing you have done, or it can just destroy you, because it is a year. I know an exchange student who went home after one month. You know you're going to be homesick. It's worse if you're not homesick at all. The first month is the worst, because you really understand that you are going to be here for one year. It was difficult, but I accepted it."

She accepted it, and she's thriving, learning, and having fun.

Kalani and April Silva are hosting Taccori this year.

Asia is the daughter of Daniela Sirigu and Davide Taccori. She has two older sisters, Giada and Sara, and a little brother named Francesco.