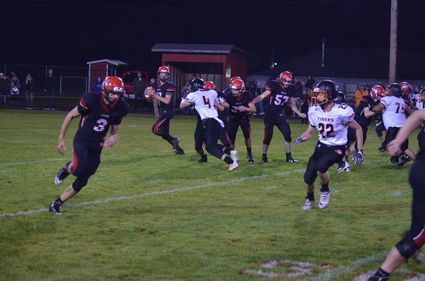 First seventh. Then sixth, followed by third and now, last Friday, first. That's the pre-league schedule for the Wahkiakum Mule football team this year: A young team gaining experience at the hands of some of the top-ranked teams in Class 2B football.

Last Friday, it was a 49-6 loss to the top-ranked Napavine Tigers. The visitors opened up a 34-0 halftime lead and played reserves in the second half as they boosted their record to 4-0.

The Mule offense struggled, making three turnovers and gaining 96 yards rushing and 40 passing. Braxton Johns was the leading ball carrier with 70 yards rushing, and eight on one pass reception. He scored on a one-run in the third quarter. Kaden Anderson completed two of eight passes, with one interception, for 40 yards; Jake Leitz had a 32-yard reception.

The 0-4 Mules open River Division play this Friday in Mossyrock against the 2-0 Vikings.