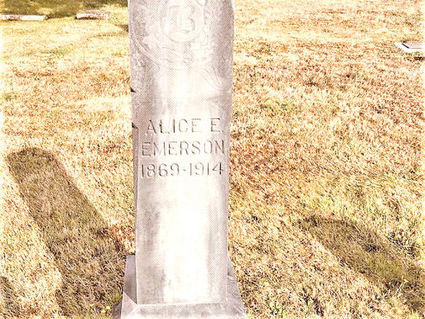 Jesse Baker Jr., his wife Julia, and daughter Alice are buried in one grave.

Grays River has been home to some of the most illustrious people who for the most part have become unknown to but a few. This all changed for me, a relative newcomer who by nature is curious. Finding the Walker home's partial history led to the discovery of the abandoned Walker Cemetery and the lost graves of the Baker family who became the ghosts of Grays River.

It is almost impossible to understand what goes through the mind of a man who leaves his native country of England with his parents only to be caught up in another country's civil war at the young age of 23 when the average age of a soldier was 26. Jesse Baker Jr. (1838-1903) was born in Surrey England, on August 1, 1838. He assembled into the Union Army as a private of the 34th Regiment, Illinois Infantry on Sept. 7, 1861, from Illinois. He re-enlisted as a veteran on Jan. 4, 1865, and mustered out as a sergeant on July 12, 1865.

The 34th Regiment Illinois Volunteer Infantry, known as the "Rock River Rifles," was an infantry regiment that served in the Union Army during the American Civil War. These volunteers came from northwestern Illinois in the valley of the Rock River; they mainly came from Whiteside, Lee, Ogle, and Carroll counties; however, some came further south from Christian, Morgan, Randolph, and Edgar counties. Jesse Baker Jr. was one of these men from Ogle County in Company H.

The 34th Illinois Infantry was organized at Camp Butler, Illinois, mustered into federal service on Sept. 7, 1861, and was involved in major battles such as the Battle of Shiloh losing 15 killed, and 112 wounded; however, the combined casualties from both sides during this two-day battle was 23,746. Jesse Baker Jr. went through all this for $13 a month. The 34th Illinois Infantry participated in some of the most infamous battles of the American Civil War such as Chickamauga (34,634 casualties), the Siege of Atlanta, and Sherman's March to the Sea in Georgia. After the surrender of General Joseph E. Johnston to Sherman, the regiment marched with Sherman's Army to Washington, D.C. and took part in the Grand Review May 24, 1865. The regiment was assembled on July 12, 1865, and discharged July 17, 1865, at Chicago, Illinois.

It was well documented in the 1880s that the deaths from both sides amounted to 620,000 deaths, although later researchers would place the number much higher. This was roughly 2 percent of the population. One out of 13 would be an amputee. If that were to happen today in the United States, one could expect deaths in excess of 6.5 million with total casualties numbering nearly 13 million. This is the type of impact that befell the entire country and specifically the Baker family.

I have only briefly touched on his military record to indicate that this man went through things that only a combat veteran understands. His family would become the most important aspect of his short life. It is not known why the Baker family moved from Illinois to Iowa, but conjecture would have it that it was land for farming. The majority of soldiers on both sides had been farmers.

After the Civil War in 1865, Jesse Baker, Jr. went to be with his parents and siblings in Aplington, Butler County, Iowa where he met and married Julia Barbara Wirt (1850-1932). She was born in Ogle County, Illinois, on March 16, 1850, and was only 15 years old at the time of their marriage. Jesse Baker Jr. was 12 years older than his new wife.

The 1880 census indicated that Jesse Baker Jr. lived in Grays River with his wife Julia and their six children: Alice, Clara, Nellie (Emily), Edward, George, and Jesse Jr. The children attended school in Grays River. About all that is known of Jesse Sr. is that he was a retired Mason. After his death, Emily Holden Baker, for whatever reason moved to Rome, Oneida County, New York, to be with her son. She died less than a year after her husband and is buried there near her son George Henry Baker.

Jesse Baker Jr. lived out his life in Wahkiakum County along with his wife Julia Wirt Baker. They had nine children, and the last of the Baker children died in 1970. Jesse Jr. and Julia are buried in Greenwood Cemetery in Cathlamet, Center Section, row 3, and grave 8 and 9. He was born August 8, 1838, in England and died June 4, 1903, at the age of 64. Two of their daughters married into the Emerson family. Alice Emily Baker Emerson is buried at Greenwood Cemetery in Cathlamet. This family was unknown to most. Jesse Baker Jr. was a true American hero and his family are no longer ghosts of Grays River.

As many of you now realize there is a need at Johnson Park for volunteers to keep the community center moving forward. What was brought up at the open forum that the public should be aware of is the location of the playground, covered picnic tables, etc. Community input as to where these go is wanted. Come by Johnson Park and see for yourself where the best location would be. Keep in mind that there is a combination soccer and baseball field as well.

Those new to the area who want to mix with other seniors: Go to The Naselle/Grays River Valley Seniors luncheon held on Wednesdays at the Rosburg Hall for those who are 55 and older; also the potluck will be at the Valley Bible Church on every fourth Wednesday. Volunteers are needed so please contact the Naselle/Grays River Valley Seniors' president Diane Hollenbeck at dianemarye@gmail.com or phone her at 1(360) 465-2991. Anyone interested in renting the Rosburg Hall is encouraged to contact Sonja Kruse at 465-2251 or Dee Nikkila at 465-2595. Thursday luncheon at noon at the Rosburg Hall is sponsored by the Community Action Program (CAP) out of Kelso/Longview. Any questions, contact Denise Rae at (360) 425-3430 extension 259. 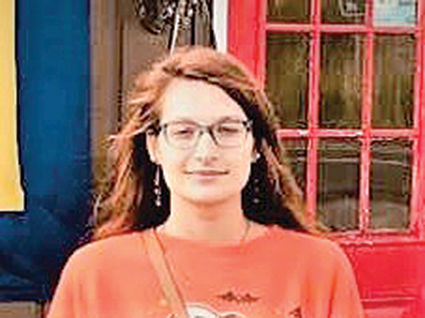 Misty Bowes is co-manager of Barns and Finds.

There is a new thrift store in Naselle across from the school on SR4. It is called 'Barns and Finds' located at 750 SR 4. It had been a restaurant in the past. The building is owned by the Johnson family, but the business is being run by Jacinta Nelson and her daughter Misty Bowes, both from Nemah. They sell vintage items, clothes, tools, and a variety of household items. The place is a bit funky, but like a caterpillar becoming a butterfly; this place is progressing rapidly since they opened this past May. Their hours are 9:30 a.m.-5 p.m. Monday-Friday and 9-noon on Saturdays. They take donations on Saturdays. For more information contact Jacinta at 360-580-8033 or Misty at 360-743-1697.