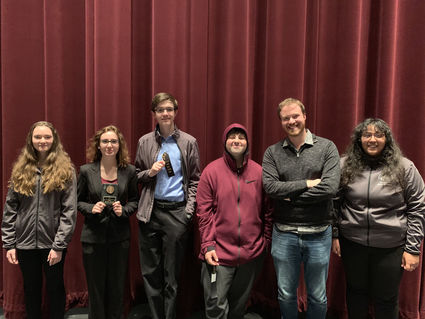 The Lower Columbia College Fighting Smelt Speech & Debate Team began their competition season with a strong result at the Fran Tanner Open tournament hosted by the College of Southern Idaho on September 27-28. The team brought five students to compete against other colleges and universities from Idaho, Utah, Wyoming, and Washington.

Competing at her first ever speech and debate tournament, Julia Mitchell of Kelso went undefeated in Novice IPDA debate preliminary rounds on her way to a bronze award. She was named 2nd overall speaker in the novice debate division. Mitchell also competed in Impromptu Speaking.

Elizabeth Brown of Kalama finished 8th in Prose Interpretation in the first tournament of her collegiate speech career.

Ayesha Ahmed of Longview competed in Impromptu Speaking while serving as a debate coach for new team members.

Next up for LCC Speech and Debate is the Steve Hunt Classic hosted by Lewis & Clark College the weekend of October 11-13. The Fighting Smelt will attend this tournament with a larger team and hope to remain competitive with the top colleges and universities in the northwest.