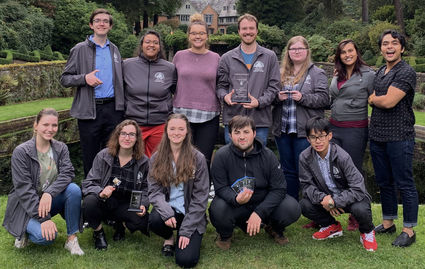 The Lower Columbia College Fighting Smelt Speech & Debate Team won 2nd place in 2-year college sweepstakes at the Steve Hunt Classic tournament hosted by Lewis & Clark College. This was the first Northwest Forensics Conference (NFC) Designated Tournament of the season. This placement confirms that LCC is a serious contender that stacks up favorably against other community college programs in the conference, which represents schools in Oregon, Washington, Idaho, Montana, Utah, and Alaska.

This team result was a true team effort, with five different members of the Fighting Smelt earning sweepstakes points across multiple competition events.

Julia Mitchell of Kelso continued her breakout season by earning awards in every category that she entered.

Eli Tovar of Castle Rock advanced to final rounds in all three of his events.

Molly Mahoney of Kelso, competing in her first ever collegiate tournament, was the champion of novice Persuasive speaking.

Elizabeth Brown of Kalama advanced to the final round of junior Prose Interpretation.

Also competing this weekend for the Fighting Smelt were Ayesha Ahmed of Longview, Ilinca Slabu of Kelso, and Sebastian Tran of Kelso.

Next up for LCC Speech and Debate is the McPherson Classic hosted by Whitworth University the weekend of October 26-27.