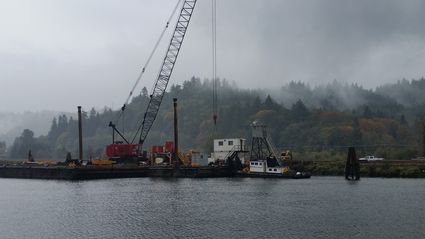 A construction crew works on a new dock for Teevin Bros., who plan to ship wood products from the site on Westport Slough near the Oregon shore landing for the Puget Island-Wesport ferry.

Changes are coming to Westport, Oregon after Clatsop County was awarded a $450,000 grant from Business Oregon to repair a dock and dredge the Westport Slough.

Teevin Bros., which is building a yard for quarry rock on a 28 acre parcel at that location in Westport, plans to move their product by trucks and barges. They are working with the US. Army Corps of Engineers and another contractor to prepare the slough for commercial use.

The entire project is expected to cost about $1.15 million dollars, but is also expected to create 27 jobs in the community, all at about an average of $70,000 per year.

In a work session with the Clatsop County Commissioners in August, Senator Betsey Johnson said that this was a chance to re-envision Westport and give opportunity to a small place.

As late as the 1960's, a sawmill operated adjacent to the ferry landing, and small ships loaded lumber at the mill's dock.