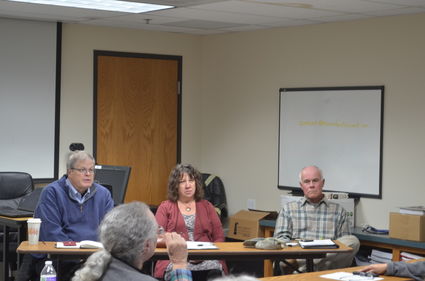 Three candidates for the Town of Cathlamet council tackled questions from a small crowd at a forum held in the DeBriae Room last Thursday.

Robert Stowe, who is running uncontested for Position 1, was unable to attend due to a prior family commitment.

“None of us who are running had any input in determining whether or not we even wanted to be part of it, Stowe wrote of the forum in a statement to The Eagle. “I find it very disappointing that the statement of purpose is for the outgoing council members to provide questions that the new council members are supposed to answer. I find it highly inappropriate for the mayor to call this meeting to grill the candidates.”

“I love it here,” David Olson, who was recently appointed to Position 4 and is running to retain it, said. “I want to make a contribution. I know something about some stuff. But boy being on the council and voting on stuff is completely different from thinking you know something. In six months, I’ve learned humility every day.”

Rose Rendler asked about the acquisition of the Butler Street property.

“I feel that it was overpaid. I feel that the citizens of the town did not have enough notice about it. I wanted to know how you feel about that and about spending more money to turn it into a park, which I don’t think a lot of people think we need,” Rendler said.

“I think almost universally people were against it,” Bill Wainwright who is running for Position 2 against Janis Dodrill, said, “except for the mayor and the council members who voted for it. I think we have to make the most of it, we own it now. What happens with it will be contingent on what the incoming council determines. It is not a good situation.”

“I think if milk has been spilt, it’s best to clean it up,” Olson said, “rather than blame or point fingers at how it happened, it happened. The town owns the lot now. I would want to do what is best and most efficient and forward looking for the town. Am I convinced that a park needs to go there? Probably not. I think that there is a parks plan. I need to know how that park fits into that plan. I need to consider, if that park goes in there, how that fits in the overall process.

“I sure wish we had a planning commission,” he said. I can’t redo what’s been done, but I can try to be transparent. I can’t tell you how much I wish there had been more transparency about this. I favor absolute transparency. I’m not afraid of public comment. I like it. I wish we could have regular public comment institutionalized at the council meetings. As for the future of the park, it will be up to the majority of the council.”

Paige Lake, who is running uncontested for Position 3, said, “We put together a petition, and within one day we had 175 signatures saying we don’t want that to be a park, we want it to stay parking. We didn’t just require town residents, because decisions made here affect everybody. So we brought those to the next meeting, but unfortunately they had sped up the escrow and closed on that property right before the meeting.”

She wanted the council to remember their mission statement, to return it to the town website, and on every agenda and letter head. The statement, which she read aloud, speaks of transparency, good stewardship, respect for the town’s heritage, and its diverse citizenry.

Another question: How do you see Cathlamet in five years?

He would like to see something done with the saloon and the dock.

“I want to see better signage on the Oregon side, I’d like to see the ferry designated the historic Lower Columbia Ferry. I think the town history should be celebrated,” Olson said.

She spoke about the Blooms group that has been planting flowers on Main Street, and how that is drawing interest.

“There is a plan that should be followed. I think it’s important that we find that, and follow that, and update it as needed.”

“I have a copy. It’s a dynamic plan, Wainwright said. “I think we have an opportunity to be something of a bedroom community.”

He spoke of the need for affordable housing.

“We will get the young people who graduate from here, they want to be able to have grandma and grandpa take care of the grandkids while they go off to work, be around on the weekends,” he added. “That will drive the need for maybe another restaurant, or a laundromat, a little more tax base, paying our water bills, getting us out of debt.”

“The 2006 plan is pretty cool,” Wainwright finished. “It centers around the water, down at the end of Broadway Street. The problem is that in the last several years, the town has chosen not to buy some of the more important waterfront properties that have come up for sale. There are enough of us around town, and deep enough pockets, that we could grow in the manner we need to, constructively, to make it a desirable place.”

Several more issues were discussed, but finally, they were all asked if they ever found themselves in a position where a decision they made was wildly unpopular, would they reconsider.

They all replied in the affirmative.