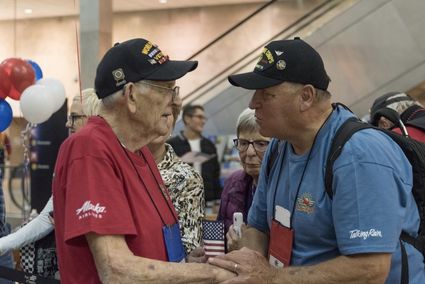 Tom Irving made a lot of new friends when he and his daughter traveled to Washington D.C. as part of a Veteran's Honor Flight in October.

"I got the booby prize," Tom Irving said.

Irving, who served in the Army's Sixth Infantry Division during World War II, moving through the South Pacific from New Guinea to the Philippines and conducting mechanized reconnaissance, was certain that at 97 he would easily be the oldest veteran on his recent Puget Sound Honor Flight to Washington, D.C.

It wasn't to be. There were 50 veterans on the trip, five who served in WWII, and one of them was 99.

A really old two dollar bill made the trip too.

When Irving joined the service, his father told him a two dollar bill would bring him luck. He carried one from the day he signed up until the day he came home.

That very same two dollar bill went with him to D.C.

"It was fabulous," Irving's daughter Kristie Moore said of the honor flight.

"From the minute we got [to the airport], the reception was just phenomenal," she added. "Right away there was camaraderie with the Korean vets. They were just shaking hands and starting up friendships immediately."

After arriving in Baltimore, the group settled into their hotel and attended a banquet that evening. The next day, the veterans and their escorts and guides made their way to the capitol.

Their luxury buses were escorted into DC by a motorcycle veterans group, Moore said.

"They had the flashing lights and pulled over the traffic," she added. "It was pretty impressive. We saw the 13 memorials and the Tomb of the Unknown Soldier."

The visit to the Vietnam memorial was particularly somber, she noted, because there were a lot of Vietnam vets participating in the event.

The following day they went to Virginia and saw the Pentagon and the Changing of the Guard at Arlington National Cemetery.

"The leaves were swirling around and coming down to the ground at Arlington Cemetery and everything was quiet," Irving said. The Changing of the Guard was very impressive. Those young people that put on that were all spit and polish."

Another high point came on the flight home.

"They had a mail call, which is typical of the days of being in the Army," Irving said.

The people of Wahkiakum County sent Irving more than three pounds of mail. His wife, Cora, included a photo of their wedding, 72 years earlier.

Some of the other vets couldn't believe how much mail Irving had received.

"He was fun," Moore said. "People will ask what the secret is to his longevity. It's his humor. It's his attitude in life." 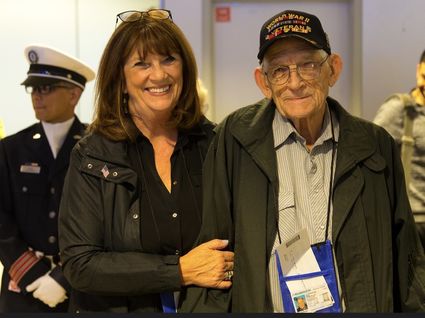 Irving was escorted by his daughter, Kristie Moore. She enjoyed the experience, but she really loved having time with dad.

He's also very active. When the buses pulled up to their destinations in D.C., Irving was always offered a wheelchair, and he always opted to walk. The first day, he walked 3.2 miles.

Irving encourages veterans to take advantage of this opportunity.

"This is honoring them, and those poor boys who didn't make it," he said.

"The thing that surprised us is that we thought this would be a journey of closure," Moore said, "but actually the friendships, the people that are calling, it's remarkable. It renewed your patriotism. There was so much respect."

"We weren't even tired when we got home. It was exhilarating," she added.

"I'm ready to go again," Irving grinned. "I made quite a few friends, old timers. We were just one big family."