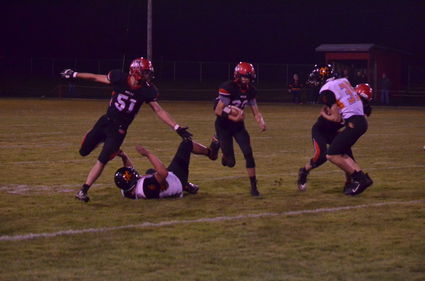 Wahkiakum Mule running back Zach Brandon followed good blocking to make some yardage in the Mules' game with Kalama last Friday. Making the blocks were Zyane Meneou (51) and KC Beery at the right.

It was Air-Kalama last Friday as the Chinooks flew to a 56-10 football win over the Wahkiakum Mules last Friday.

Focusing on their aerial game, Kalama scored all touchdowns on pass plays. The third ranked Class 2B football team in the state, they rolled to a 32-0 lead in the first quarter and 48-0 at halftime. 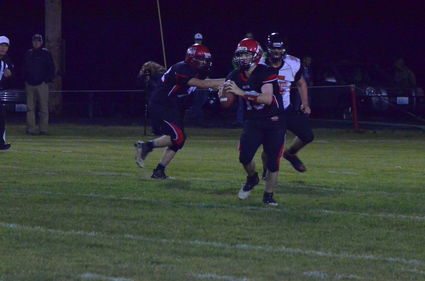 Despite injuries to linemen, the Mules rushed for 133 yards. Zach Brandon led with 79, Moon had 29 and Jake Leitz 24. Moon passed five times with one completion for 12 yards.

The Mules host the Winlock Cardinals this Friday to close out the regular season. Winlock lost 32-13 to Toledo last week.