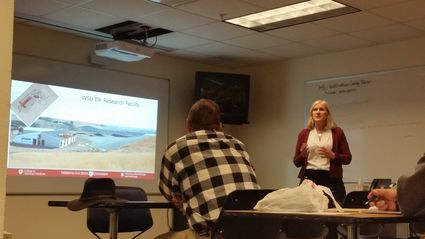 The effort to find the cause of elk hoof disease has turned into a scientific quest.

The disease attacks the hooves of elk, eating away the foot and causing them to walk on soft tissue. The hooves grow long and can eventually slough off.

The disease was first observed in southwest Washington but has been observed in Clallam County, the Skagit River valley, east of the Cascades in Washington and Oregon along the state line and into Idaho.

Residents of southwest Washington have noticed a decrease in numbers of elk, and as the disease spread, hunters and the Washington Department of Fish and Wildlife (WDFW) began studying the disease. The legislature has authorized the Washington State University (WSU) School of Veterinary Medicine to undertake research into the disease and provided funding for the program and a research facility that is now under construction.

WSU chose Dr. Margaret Wild to lead the research. Before coming to WSU in 2018, she was the chief wildlife veterinarian for the National Park Service and has conducted research on elk, deer, bison, bighorn sheep, mountain goats, pronghorn antelope, mountain lions, Canada lynx, and black-footed ferrets. Her recent work focused on chronic wasting, the wildlife form of mad cow disease affecting deer and elk in many states.

At the invitation of the Wahkiakum County Board of Commissioners, Wild visited Cathlamet Oct. 30 and discussed the elk hoof disease at a public meeting.

"I currently believe treponeme are associated, but it's not all about those treponeme," she said. "We don't know if it's a primary cause or a result of the illness. I don't want to take anything off the table.

"We're going to focus on bacteria now and tease out each one of the components. It's really complicated to do, especially because these are free range animals."

It's not caused by a virus she added, and they've ruled out another possible bacteria, leptospirosis.

"Several years ago, it was a reasonable hypothesis," she said. "They are similar to treponeme. I think we've looked at enough DNA samples; we haven't found any DNA signatures for leptospirosis."

Wild and her colleagues have developed an approach to the disease.

1. Study the disease cause(s) and contributing factors in captive elk. Construction will be completed late this year on an elk research facility designed to house both ill and healthy elk. Funds appropriated by the Washington State Legislature and the Rocky Mountain Elk Foundation are paying construction costs. Initial efforts will focus on determining if the disease is contagious and if it can be reliably reproduced in elk following exposure to infectious material.

2. Study the disease agents in the laboratory. Researchers will look at all genetic material to determine what organisms are present in general and at specific points in the disease.

3. Conduct regional surveillance. Researchers will coordinate with wildlife managers in Washington, Oregon and Idaho to collect hoof samples to document where THAD occurs.

4. Understand social aspects of the disease. Researchers will survey hunters, wildlife managers and others to understand social perspectives. Understanding what society will support or reject can guide research or treatment efforts.

Even if researchers identify the cause of the disease, a treatment would be difficult to implement.

It's difficult to treat some diseases in domestic animals, Wild said, and in a wildlife population, it can be almost impossible.

"I hope the animals will develop an immunity," she said. "As a vet, I tend to hope for things like that, but I don't count on them."