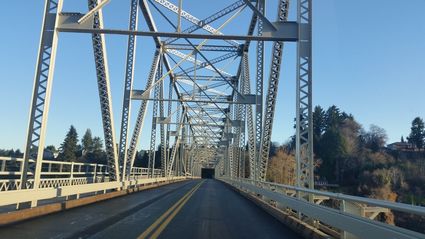 Photo and story by Rick Nelson

Editor’s Note: This story has been updated to include information received after the print edition went to press.

Work on the Puget Island bridge is coming to an end this month, Washington State Department of Transportation officials said this week.

The project, which consisted of painting and installation of a new deck on the bridge, has been completed over a year ahead of schedule, according to a department news release.

On Nov. 8, construction workers removed lights and traffic cones that had guided motorists in single lane traffic. Traffic signs have been covered with black plastic until they can be removed.

“We are hoping to resolve an issue with the bridge joints by Dec. 2nd,” she said “We believe the materials will be available and the work can be done that week or the following week.”

According to the news release, "the new coat of paint and bridge deck on the 80-year-old structure will help preserve the bridge's structural integrity, restoring this important transportation connection and prolonging the life of the bridge."

Motorists have noticed that a portion of the railing between the bridge's superstructure and concrete structure hasn't been painted.

"The portion of railing which has not been painted will not be painted, as it is galvanized – which means the metal already has a protective coating and does not require a coating of paint," Tamara Greenwell, regional communications officer said.

Work on the $17 million project began in 2018. Work on the narrow structure required an around-the-clock single lane closure and with 61 overnight bridge closures.

“While there’s no good time to close a bridge, input from the community helped to inform when full closure of the bridge would occur,” said Project Engineer Joanna Lowery. “We’re pleased to complete this work well ahead of schedule, and are grateful for the partnership and patience of the community throughout the project.”