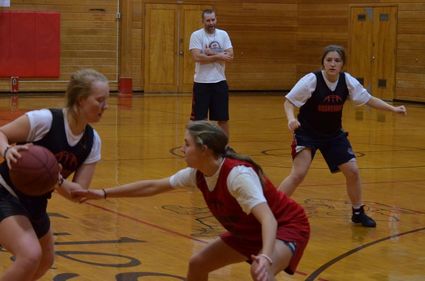 "It's a very hard-working group," Coach Garrett said. "We will be a great defensive team. Offensively, Jansi Merz and Paige Mace will certainly lead the way with any one of a number of kids helping out big on a given night. We have a very tough schedule and are looking to put ourselves in tough situations all season long to be ready at the end of the season to hopefully knock off some of the favorites. Should be another fun season, hopefully capped off by a trip back to Spokane. It will take a ton of hard work and so far this group has showed they are willing to step up to that call."

The boys basketball team has four starters returning, according to Coach Todd Souvenir.

"They will have big roles on and off the court," Coach Souvenir said. "For the first time in a while, we have guys that spent plenty of time in the gym during the off season and you can see their growth both in leadership and ability,"

The team is taller this year as well, with five reaching 6 feet or more.

"Depth has been an issue for the last few years but this year we have several guys that will help in many ways," Coach Souvenir said. "We have a lot of potential, but if we want to reach our goals we will need to buy in on the defensive end and play for each other. We have a very difficult schedule and play in a tough league, so we need to stay focused on the team in front of us.

The Mule boys travel to Rainier for a jamboree on Saturday, and play their first game at home on Tuesday, December 3, against Firm Foundation. The Lady Mules head to Longview on Tuesday to play in a jamboree at Mark Morris and on Wednesday, they host Columbia Adventist.

Mule wrestlers travel to Ocosta on December 7 for their first match of the season.

Complete schedules will be published next week.