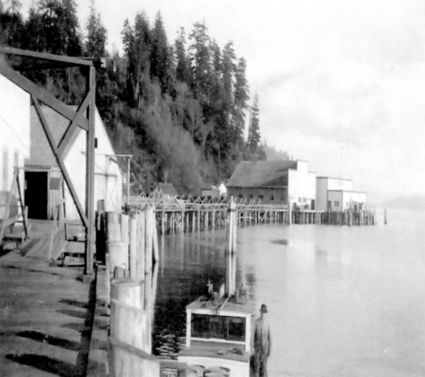 In the 1830's the Altoona site was used by the Hudson's Bay Company as a fish receiving station and saltery, an establishment in which fish are salted for market. William Hume, a long-time fish entrepreneur, and his brothers George, Joseph, and Robert, opened a fish receiving station. William Hume established the first salmon cannery on the Columbia River at Eagle Cliff in 1866. The Hume brothers would go on to own half of the 35 canneries on the Columbia River. By the end of 1867 more than 18,000 cases of salmon were packed in their canneries. In the early 1890s Miller Sands--the shallows offshore from Altoona--provided good salmon seining grounds.

A Danish immigrant named Hans Peterson named Altoona after Altona, a city in Germany which was a major fish-processing city on the Elbe River. In 1903, Peterson, who had been an employee of William Hume, purchased 830 acres of land and founded the Altoona Mercantile and Fish Company Cannery. By 1910 the Altoona cannery ranked fourth among the Columbia River canneries. A fleet of 25-foot sail-rigged gillnet boats operated out of Altoona, fishing at night, when nets were imperceptible to the salmon.

Altoona developed into a major stop for steamers and fishing boats traveling between Astoria and Portland. Altoona was only accessible by boat because there was no direct road there until the early 1950's. The main reason for having the roads connecting Rosburg to Altoona was that remaining residents needed an alternate way of traveling other than by boat. In 1931, a bridge was erected over the Grays River, and by 1935 it was extended to Cottardi Station, less than a half mile west (downstream) of Altoona. The road finally reached Altoona in 1943. Those of you readers will understand how difficult it would have been to try to even walk from Altoona to anywhere. The giant trees that were there at the time choked out the smaller trees that in turn rotted to the ground creating virtual choke points everywhere. Ask any modern hunter who has gone into pristine land, and they will tell you not only of the difficulty in traversing the terrain, but of how one must be in very good shape physically to endure it.

In 1905 Frederick Klevenhusen, a wealthy German packer, was interested in a mild fish curing operation and cold storage. Hans and Nellie Petersen of Altoona sold 1.48 acres, including docks and water rights to Frederick Klevenhusen, Sr., Frederick Klevenhusen Jr., Friedrich Wilhelm Klevenhusen and Conrad Klevenhusen, Partners, doing business as F. Klevenhusen & Co. The Klevenhusen Cold Storage plant at Altoona stayed in business until May 6, 1932 when the Klevenhusen cold storage and receiving station burned, leaving a large number of piling and a picturesque old boiler and engine. It was known as Pacific Fish Co., and was under lease to Max Pudich and Max Berg. The latter was living in Ft. Bragg, Calif., and Mr. Pudich was in New York on his way to Astoria following a visit to Germany. It had been taken over several months earlier by Astoria Savings Bank to settle the estate of Klevenhusen and was renamed the Pacific Fish Co. The plant and equipment was valued at $40,000. One diesel engine, a steam engine, considerable cold storage equipment, several nets, and the building were all lost when it burned to the line of piling. There was only $14,000 in insurance covered by the Astoria Savings Bank. The ruins of the Klevenhusen Cold Storage plant's compressor are among the remaining remnants of Altoona's past.

The Appelo Archives Center at 1056 State Route 4 in Naselle will host this celebration on Saturday at 2 p.m. Pictures with Santa will begin at 1 p.m. for $20 a packet. Each packet will include one 8x10, two 5x7, and two 4x6 pictures and/ or disc or emailed copies.

The Scandinavian traditional celebration continues with a procession led by local St. Lucia designee who is followed by young girls wearing aprons and boys carrying gold stars. This festival marks the beginning of the Christmas season in Scandinavia as well as here locally with the intent to bring hope and light during the darkest time of the year. The story of Santa Lucia will be read and refreshments will be served.

Set your calendars for a Dec. 8 concert at 1:30 p.m. at the Deep River Pioneer Church sponsored by the Finnish-American Folk Festival. This is their annual Christmas concert and tour of homes. Then the soup supper will be held 4-6 p.m. at the Naselle Community Center, 14 Parpala Road. Tickets are $5 per person. Tickets and maps available at Mike Swanson Realty, Naselle; Finn Ware in Astoria, and Hair Villa, Naselle.