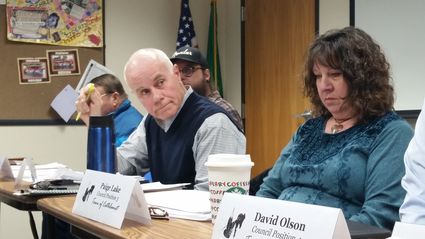 Bill Wainwright, center, and Paige Lake joined the Cathlamet Town Council on Monday. Ryan Smith, behind Wainwright, took part in his last meeting, for his term has come to an end.

With two new members at work, the Cathlamet Town Council tackled a variety of business at the December meeting on Monday.

Town Attorney Fred Johnson issued oaths of office to Bill Wainwright and Paige Lake, who were elected this fall. They took seats at the table; Robert Stowe was also elected this fall but chose to sit in the audience; he swore the oath of office after the meeting and will join the council at their next meeting.

The council started with consideration of service fees and charges and decided to delay action so they could have more time to analyze them.

"Some are ancient," Wainwright said.

Clerk/Treasurer Sarah Clark said she had collated the list from town ordinances and that some fees haven't been imposed in years, dog license fees, for example.

Johnson suggested the council consider the four pages of rates and fees "in chunks" and go over them carefully.

"Some are set by ordinance so you can't come in at the next meeting and change them," he said.

"Some of the rates are the reasons people say they don't want to live in town," said Council Member Laurel Waller. Council members need to consider increases and other adjustments carefully so they don't come back in the future as problems.

After more discussion, the council agreed to hold a special meeting January 8, 9 a.m., to continue consideration of the rates and fees.

--The council received three bids for landscaping and related services. However, the bids varied greatly in scope, and Council Member David Olson requested a detailed request for proposal (RFP) be drafted so that the bids would be comparable. Johnson said he and Clark could prepare the RFP, and interested bidders could take a walk through to understand what the council expected.

--After discussion, the council voted to authorize Mayor Dale Jacobson to accept a grant offer from the Lewis & Clark Heritage Trail Foundation of Grand Forks, Mont. Olson said the town must act before the end of December, if the grant is offered.

The grant would total $7,500, with the town making a 25 percent match; it would finance four signs directing travelers to Chinook Indian heritage sites. One would be at the Elochoman Marina; the second would be at what's called Queen Sally's Park, which lies adjacent to the municipal library parking lot, and the last two along SR 4 directing travelers into town.

--Council members agreed to delay action on a resolution to claim a portion of state sales tax for housing for homeless persons to the January 8 meeting. Chris Bischoff, director of Wahkiakum County Health and Human Services, asked the council to collect the revenue for the county program. Bischoff said the money would be used to help people stay in their homes and finance expenses such as heating fuel.

He estimated the total reclaimed from the state would be about $3,000 a year; of that, the town would receive less than $1,000. However, Council Member Lake said she had a different understanding of the statutes and believes the town could collect a higher total which could be passed on to the county.

--The council selected Waller to be mayor pro tem for the first six months of 2020; she would conduct meetings in the mayor's absence. However, the council and mayor left selection of liaison positions to a later meeting. Waller advocated allowing council members to request positions that interest them, but Jacobson, who introduced the practice to the council, said it is educational for council members to take on responsibilities new to them.