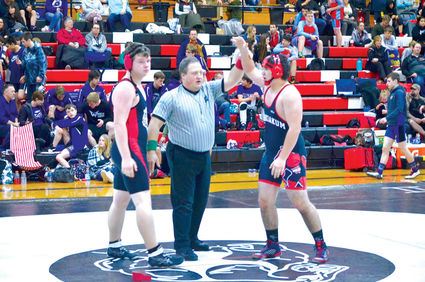 Wahkiakum Mule wrestler Cayden Mendez gets a win in the Wahkiakum Downriver Challenge.

The gym was packed on Dec. 21 when the Wahkiakum Mules wrestling team hosted 15 teams for the annual Down River Challenge.

"The kids did awesome this year," Coach Crystal Davis said. "We had a few hiccups at the tournament, but after we got everything figured out, it ran smoothly." 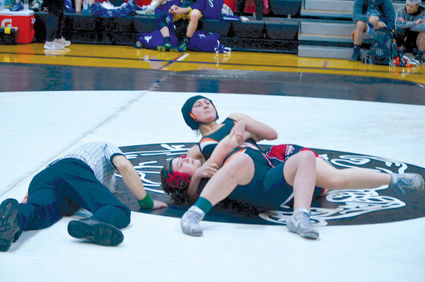 Mule Lillian Hale may not be in the position she wants, but she made her opponent work for the point.

Makayla Davis took first in the girls division and second in an all boys bracket. Jenna Mellis took second in her division, Hannah Mendez and McKenna Mendez took third in their respective divisions. Arwynn Haney got a second place medal, and Lily Hale took third place.

In team competition, the Mules took sixth place out of 16 schools.

The Mule wrestlers picked up a couple wins and otherwise placed well last weekend at a tournament in Clatskanie.

For the boys, Cayden Mendez and Gabe Moon took second in their respective weight classes. Braxton Johns and Jamil Dimaano took fourth in their divisions.

Next Tuesday, the team travels to Adna for more competition.