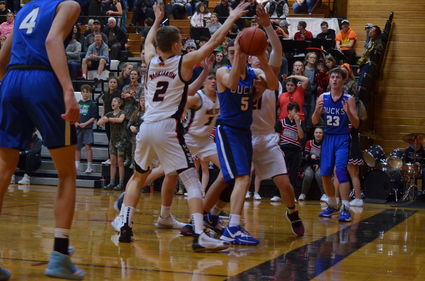 Despite a big effort from the Wahkiakum Mule defense, they lost to Toutle Lake on Friday, 60-44.

The Wahkiakum Mules boys basketball team won two and lost one this week.

The Mules hosted Toutle Lake on Friday, and despite hanging with the Ducks for three quarters, they were outscored 21-6 in the fourth quarter and lost 60-44.

"Toutle Lake is probably the best team in the league," Coach Todd Souvenir said. "I thought we did a great job through three quarters. We held their best two players to 11. They came out and made some tough shots in the fourth quarter and we put our heads down a little bit. Once we fell down by eight, it was tough to get back and to get that confidence back that we had through the first three quarters. I think we can beat that team. We showed signs in the first three quarters of what we could do, we've just got to figure out how to play four quarters."

"It's all there, the guys are doing a great job. It's getting better game by game," Souvenir said.

Leitz led the Mules with 17 points. Carlson had 14. Avalon scored seven points. Beery had four and LaBerge finished with two.

On Monday, the Mules beat Onalaska in front of a home crowd 51-48.

"I thought we did really good job on the defensive end, being a little bit more physical and recognizing where the shooters are," Coach Souvenir said. "Onalaska played a really tough man defense and they really bothered us and there are definitely some things that we need to work on against that style of defense." 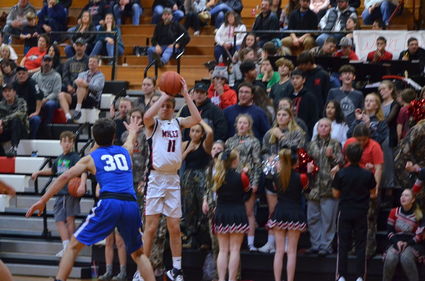 Several Mules can shoot from the perimeter, including freshman Brodie Avalon, who had seven points against the Ducks on Friday.

"I thought the guys, overall, did a really good job," he continued. "The fourth quarter we played some good defense and in the end we gave up a few easy ones. One of the things that has caused us problems in a couple big games is the offensive rebounding. Logan (LaBerge) had a really good game. He made some clutch shots and kind of helped us against their man defense, getting in the lane and finishing and creating for his teammates. He did a lot of good things in the fourth quarter and we came out with a win."

The Mules traveled to Kalama yesterday (Wednesday), but a score was not available at press time. They travel to Winlock on Friday and face Adna at home next Wednesday.