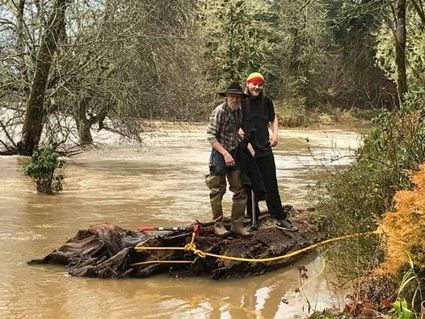 Wes Ware and Nick Hummer salvaging a cedar log during the past week's high water.

Every once in a while the Grays River overflows its banks and sends thousands of cubic feet of water and debris downstream. The first freshet of 2020 brought not only flooding to the Westend, but an opportunity for a few to pull things from Grays River that has value. About 30 yards west of Duffy's on Friday afternoon I saw Wes Ware and Nick Hummer on a very large cedar log near the bank on the river. Their opportunity was to get this valuable cedar out of the water before it went further downstream. As I was watching from a safe distance, I casually asked them which one was going to fall in the river first. Wes immediately pointed to Nick and laughed. I went up the hill to the parking lot to get a better picture when I heard a splash. I quickly turned around to see Nick getting back on the log soaked from the waist down; nothing hurt but a little pride. The next day I went back to see that not only had these men salvaged this massive cedar log, but were using a chain saw to cut it into sections.

In my opinion an art show is more than looking at a bunch of paintings and eating snacks. When one really takes the time to examine any painting, one can imagine the patience it takes to precisely make each brush stroke. I can't be a judge as to who had the best paintings because each artist has their own unique way of expressing themselves through their art and it comes through in their work. Those of you who really appreciate what artists paint came to the Art Show at the Grays River Grange #124. This was not a Grange sponsored event, but the Grange was rented for this event. The show was held this past Saturday from 12-4.

Local artists involved were: Noreen Fitts, Gail Wahlstrom, Krsto Novoselic and Carol Ervest. This art show was particularly fun because of the interaction of everyone as if it was a church social where everyone was talking and snacking while enjoying these magnificent works of art. I was able to come home with an incredible blue painting given to me by Krsto Novoselic of three sailing ships on the horizon. I am not sure why he gave me this painting, but I will treasure it for the rest of my life. It is above my desk where I see it now every day. For some reason when I look at it, it reminds me of my youth. I took some photos for The Wahkiakum County Eagle, but realized that photos of paintings do not capture the essence of what the artist portrays. By the way, ask Krsto Novoselic to show you your future and he will discreetly show you.

Three Naselle High School knowledge bowl teams competed in an ESD 113 knowledge bowl meet at Grays Harbor College on Jan. 10 against 38 other teams from Raymond, South Bend, Willapa Valley, North River, Ocosta, North Beach, Hoquiam, Wishkah, Montesano and Elma (41 teams total). Once again, Monte and the Pythons placed third overall (first among 1B teams)-holding second place in the championship round until the final question. Monte and the Pythons consisted of Zanith Wulf, Travis Popkin, Cooper Miller and John D'Agostino (Monte Schell was unable to compete due to a basketball commitment). Scott's Tots placed 13th overall and third among 1B teams. Scott's Tots was comprised of Jack D'Agostino, Theron Frame, Ryan Waltemate, Riley Thorsen, Owen Matthews and Parker Kilponen. Hoops I Did It Again consisted of Emma Colombo, Brynn and Kylee Tarabochia, Courtney Paul and Mia Watson-placing 24th of 41 overall and fifth among the 1B teams. Monte and the Pythons will regain Monte Schell and pick up Brayden Colombo to compete at the ESD regional meet in Tumwater on Feb. 7 for a chance to qualify for the state tournament in March.