The high school robotics team and a support group of middle school future robotics team members played for 15 hours traveling to Olympia and doing robotics with 35 other teams coming from Seattle to Vancouver in the Watt Interleague Championships. 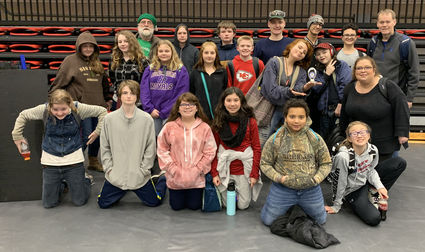 We played five matches, two-on-two, with many of the other teams. One of our matches was against the eventual winner from Union High school, Geared Reaction. They were tough!

Robotics does not have school association levels - we are all in there together. During awards we were surprised and pleased to learn that we earned the "Motivate Award" trophy. This is given to the one team that most exemplifies FIRST Robotics in community involvement. As the award was presented the announcer especially noted our mentoring elementary school students, our presentation to our county commissioners, and our recent award from Wauna Mills Georgia Pacific.

Thanks, everyone for supporting our STEM robotics programs in the district! This is another example of how well our district is preparing our students for careers in the modern economy. Our next event is the tournament we are hosting here in Wahkiakum on March 19. Come to school and check us out.