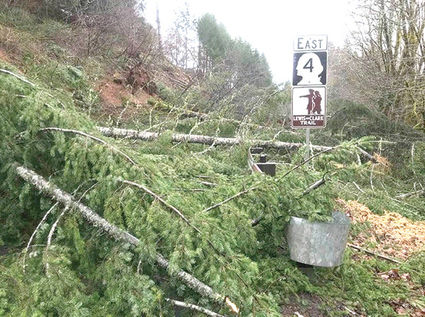 A land slide last Thursday blocked SR 4 with trees and dirt near the eastern foot of KM Mountain. Washington Department of Transportation engineers hope to have one lane open to traffic early next week, if not sooner.

GRAYS RIVER (Jan. 27) -- Washington State Department of Transportation (WSDOT) has indicated to those who travel State Route 4 near West Fork Creek on the east side of KM Mountain should plan ahead for a prolonged closure.

Last Thursday, a good sized portion of an adjacent hillside slid carrying rocks, mud and trees onto the roadway at mile point 25.5.

On Friday, WSDOT personnel at the site said the hillside is actively moving and too unstable and saturated from heavy rainfall to safely clear and reopen the highway at this time.

When one of the WSDOT workers began cutting on one tree the land began to move more.

Celeste Dimichina, WSDOT Communications Consultant and Media Relations spokesperson, said that two Washington State Department of Transportation geotechnical engineers stopped them, and department personnel will monitor the hillside through the weekend for the potential of additional slides.

There were two smaller slides west of the slide that were already cleaned up, and this writer also noticed while on KM that there are also two other potential slides near this one.

According to a report from the Wahkiakum County Sheriff's office, a WSDOT project engineer said a crew is going to have to build a rock buttress at the bottom of the slide. The work won't start for a couple more days and will most likely take a week or longer. 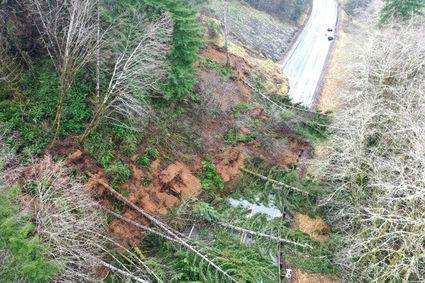 An aerial view of the slide on KM.

Also, the Sheriff's office will continue to patrol the Westend for those who may be concerned about public safety.

To get an idea of how bad this landslide is, one may watch the drone video of the slide: https://youtu.be/D3r11Mk-C3w.

During the closure traffic can use Highway 30 in Oregon by crossing at The Lewis and Clark Bridge in Longview or the Astoria Bridge into Oregon. Local traffic can use the Wahkiakum County Ferry, the Oscar B which will run on a 24/7 schedule during the highway closure at no charge.

Westend mail carrier Shelby Hoiland stated that the mail will be delivered every day, but will be much later than normal. She comes by ferry, and it has added four hours to her schedule.