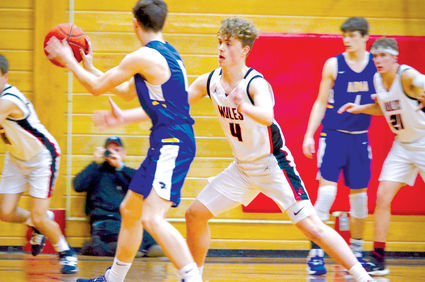 "Adna played with a lot of energy on both ends of the floor and we struggled to match up with Braden Thomas inside," Coach Todd Souvenir said. "He is a very physical and athletic player."

On Monday, the team traveled to Rainier and won 47-26.

Wahkiakum Mule point guard Logan LaBerge looked for the next play in action against Adna.

"It was an ugly game for both teams offensively," Coach Souvenir said, "but I thought we moved the ball well in the third which led to 19 of our 47 points and secured the win."

The Mules traveled to Onalaska on Wednesday, but a score was not available by press time.

They host Morton/White Pass on Friday and Mossyrock on Tuesday. Their record is currently 3-4 in league, 10-7 overall. District play begins on February 11.