Lady Mules win one, lose one as district nears 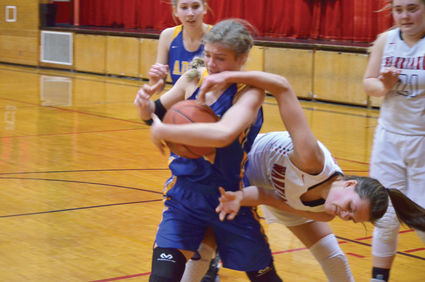 Emerald Niemela struggled with an Adna player for the ball.

The Wahkiakum Mules girls basketball team split games this week, with a tough loss on Thursday and an easy win on Monday.

The team hosted Toledo on Thursday, and lost to the Indians 53-48.

"It was a great defensive first half," Coach Rob Garrett said. "We put ourselves in a good situation. Unfortunately, our defense let up a bit in the second half and offensively we struggled in the third. With that being said, it was great to see our girls battle back and be right there in the game with a chance to win down the stretch. It was a great atmosphere that will provide our young girls with some pressure experience and will motivate us down the stretch." 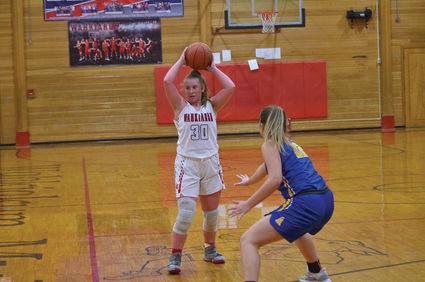 "Our defense was not only great but our rebounding took a huge step in the right direction," Coach Garrett said. "Our guards boxed out and cut girls off so the posts could go attack the rebounds high and finish the play. Defense and rebounding has been our focus for a couple weeks now and it was really good to see the girls starting to see some of the rotation in game speed on their own. Defense is our strong suit and what will keep us in games as the playoffs come. Our girls also put a ton of time in the gym and it's just a matter of time till those shots start to fall. We are definitely going down the right path now and that's a good place to be right before district."

The team traveled to Morton/White Pass on Wednesday, but the score was not available by press time.

The Lady Mules were in fourth place in the Central 2B League as of Tuesday, with a 7-2 league, and 14-4 overall record. If their position holds, they will likely begin district play on Feb. 12, possibly Beb. 15. Watch the Wahkiakum Eagle Sports Report Facebook page for updates.