Mules close with 2 wins; district ahead 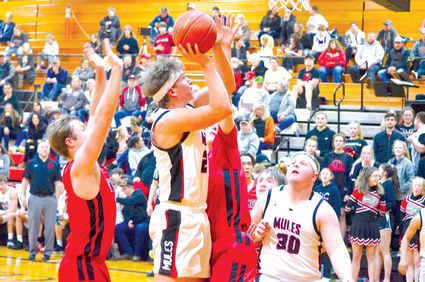 Senior K.C. Beery had a big week, scoring 10 points against MWP on Friday, and 23 against Mossyrock on Tuesday.

The Wahkiakum Mules boys basketball team finished their regular season this week with two wins and one loss.

Last Wednesday, they traveled to Onalaska and lost to the Loggers 73-56.

"We played well for three quarters on both ends versus a tough and physical Onalaska team," Coach Todd Souvenir said, "but in the fourth we had too many turnovers, which led to easy transition buckets for them."

The team hosted Morton/White Pass on Friday, and beat the Timberwolves 70-56.

"We played a great defensive game from start to finish," Coach Souvenir said, "and on the offensive end, we played through some adversity with Jake (Leitz) in foul trouble. We moved the ball and ran our offense from start to finish, which led to open looks and several guys making some shots. Really good win against a tough team as we approach the district tournament."

Leitz led the Mules with 23 points and seven boards. LaBerge added 13 points and six assists. Carlson and Avalon had 12 points apiece. Beery finished the game with a double double, 10 points and 10 rebounds.

And on Tuesday, the Mules crushed Mossyrock at home 89-42.

"We wanted to have some fun tonight and focus on sharing the ball," Coach Souvenir said. "I thought the guys did a great job and were very unselfish while trying to create opportunities for our only senior on senior night."

They did that. Beery, the lone senior on the team, put on a show and scored 23 points. LaBerge scored 15 points, pulled down 10 rebounds, and had five assists and five steals. Leitz had a double double with 14 points and 14 rebounds. He also had six assists. Avalon also had 14 points, seven rebounds, and five steals. Carlson scored eight points and had four assists. Rose had seven points, Titan Niemela had five, and Kyler Sause finished the game with three points.

The Mules were in sixth place in the Central 2B League with a 5-5 league, 12-8 overall record, as of Tuesday. District play will begin on February 11, likely at 7 p.m. at home. Watch The Wahkiakum Eagle Sports Report Facebook page for updates on place, time, and opponent.

Photos and story by Diana Zimmerman

The Wahkiakum Mules girls basketball team split games this week, with a tough loss on Thursday and an easy win on Monday.

The team hosted Toledo on Thursday, and lost to the Indians 53-48.

"It was a great defensive first half," Coach Rob Garrett said. "We put ourselves in a good situation. Unfortunately, our defense let up a bit in the second half and offensively we struggled in the third. With that being said, it was great to see our girls battle back and be right there in the game with a chance to win down the stretch. It was a great atmosphere that will provide our young girls with some pressure experience and will motivate us down the stretch." 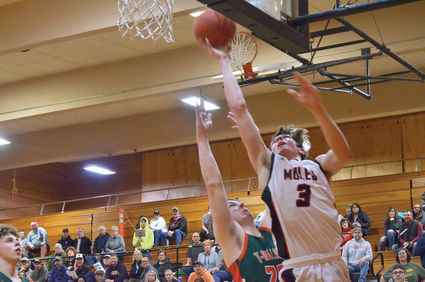 Jake Leitz, where he seems to be most comfortable, up around the basket.

"Our defense was not only great but our rebounding took a huge step in the right direction," Coach Garrett said. "Our guards boxed out and cut girls off so the posts could go attack the rebounds high and finish the play. Defense and rebounding has been our focus for a couple weeks now and it was really good to see the girls starting to see some of the rotation in game speed on their own. Defense is our strong suit and what will keep us in games as the playoffs come. Our girls also put a ton of time in the gym and it's just a matter of time till those shots start to fall. We are definitely going down the right path now and that's a good place to be right before district."

The team traveled to Morton/White Pass on Wednesday, but the score was not available by press time.

The Lady Mules were in fourth place in the Central 2B League as of Tuesday, with a 7-2 league, and 14-4 overall record. If their position holds, they will likely begin district play on February 12, possibly February 15. Watch the Wahkiakum Eagle Sports Report Facebook page for updates.