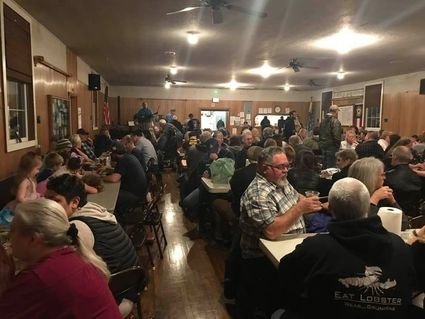 Saturday evening was quite a delight for the supporters of the annual American Legion crab and oyster dinner. Some of those who live on the east side of KM were not aware that as of approximately four p.m., Friday the highway was open to single lane traffic. They took the ferry to Westport then on to Astoria to cross the bridge to come back to Rosburg. That is a two hour drive one way. Fortunately they had a shorter ride back over KM. Dale Rose informed me that about a dozen did not make it to the dinner and dance. Rosburg Hall was still filled to capacity.

It took dozens of volunteers to pull off this wonderful event that included 500 pounds of crab and 24 bushels of oysters. The preparations for this event included gathering all the necessary food supplies, power washing all the oysters as well as all the cooking and cleaning it took to make it a success. Even though they had a bar, there were no incidents of gross intoxication or rowdiness. Events in this county that I have attended have always been more like a family reunion or a birthday party. The music was perfect for this type of venue. It was provided by Layton Elliott playing guitar and singing while his wife Pam accompanied him on drums.

I can't speak for every veteran, but for some this will make sense. After spending some time on the phone with Ken Elliott, it occurred to me how big of an impact these volunteer veterans have on their community. They served their country in the military and now they are still serving as American Legion volunteers for our community. As a fellow veteran, I was seeing these men and women serving others with no compensation, but the satisfaction that they do make a difference. This has helped to mellow me and heal me from my own PTSD. I have realized that I'm not the only veteran with issues, yet these honorable men and women continue to bless those around them. I am deeply humbled by their continued sacrifice for the betterment of our community and the world.

The Naselle/Grays River Valley Seniors luncheon will continue as before on Wednesdays at the Rosburg Hall for those who are 55 and older; also the potluck will be at the Valley Bible Church on every fourth Wednesday. Volunteers are needed so please contact the Naselle/Grays River Valley Seniors' president Diane Hollenbeck at dianemarye@gmail.com or phone her at 1(360) 465-2991. Anyone interested in renting the Rosburg Hall is encouraged to contact Sonja Kruse at 465-2251 or Dee Nikkila at 465-2595. Thursday luncheon at noon at the Rosburg Hall is sponsored by the Community Action Program (CAP) out of Kelso/Longview. Any questions, contact Denise Rae at (360) 425-3430 extension 259.

The Naselle Grays River Valley High School's top knowledge bowl team, Monte and the Pythons, competed at the ESD 113 small school regional knowledge bowl meet on Friday, February 7th in Tumwater. Monte and the Pythons consist of Monte Schell, Zanith Wulf, Travis Popkin, John D'Agostino and Cooper Miller. The Naselle-GRV squad competed against 17 other Class 1B and 2B schools from throughout Pacific, Lewis, Grays Harbor, and Thurston counties, which included perennial private school powerhouses Pope John Paul II and Northwest Christian of Lacey. In fact, Naselle was the only Class 1B School to face off against the two private schools. At the end of the written round and four preliminary oral rounds, Naselle held third place out of the 18 teams.

Naselle squared off against eventual second place winner Mossyrock and North Beach in the semifinal round. Naselle came up a couple of points shy of winning the semifinal round before facing Northwest Christian and Adna in a consolation round. At the end of the day, Naselle placed fifth overall and seconded among the 1B schools. Pope John Paul II won first place overall and first among the 1B teams. During the earlier rounds, Naselle tied Pope John Paul II with 13 points apiece and beat Northwest Christian 11-10. Naselle qualified for state competition at West Valley High School in Yakima on March 21.

Coach Justin Laine is extremely proud of his team's efforts as they earned third place out of approximately 50 teams (many of them from Class 1A and 2A schools) at each of the regular meets. They competed well at the regional meet, and he looks forward to a good showing at the state meet in Yakima.

Join Kim Birchfield at the Naselle Timberland Library and learn to play ukulele from scratch; anyone can learn to play. Ukuleles provided for library use in the Meeting Room on Tuesdays February 11-25, 11 a.m. to 12 noon.