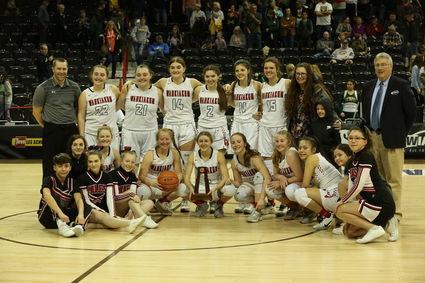 The 2020 Wahkiakum girls pose with their third place trophy at the State 2B tournament.

The Wahkiakum Mules girls basketball team, or the hardest working team in the west, proved they could play with anybody this year, and brought home a third place trophy from the State 2B tournament in Spokane.

They began state play on Thursday with a win against Toledo, 55-48.

"The Toledo game was a blast," Coach Rob Garrett said. "We were well prepared and the girls went out and played with confidence. It was a lot of fun to see them go out and get redemption for their regular season loss against Toledo in such a big game at Spokane."

On Friday, the Lady Mules lost to LaConner in the semifinals, 46-40.

"LaConner started off great and unfortunately the ball just didn't bounce our way," Coach Garrett said. "You have to give LaConner a ton of credit as they worked extremely hard. With that being said, I was very proud of these girls. If you look at LaConner's offensive stats, they were off the charts. Even on a rough night we held them to just 46 points. That shows just how hard our girls work at the defensive end. A couple more balls bounce our way and that was our game. It was still a lot of fun, though, and our girls never gave up."

On Saturday, freshman Reigha Niemeyer hit a jumper in the last moment to lift Wahkiakum over Northwest Christian in overtime, 48-46.

"NWC was the best possible game to sum up this season," Coach Garrett said. "We jumped out of the gates showing what this team is capable of and then got a little inconsistent due to our youth. Don't worry, though, this team never fails to grow and do it together too. Paige (Mace) was our fearless leader that game, and Jansi (Merz) snatched up every rebound. Then when things didn't quite go their way, a teammate was there to have their back. 'Kimbo' (Watkins) not only grabbed the offensive rebound with 10 seconds to go, but put back a game tying basket, soft touch and finish. This is something we had discussed at halftime, which is another testament to who this team is. They are always wanting to learn. Not too much later in overtime, Jansi had fouled out due to some questionable whistles, and Paige found herself with the ball and an opportunity to win the game. After wisely letting the clock wind down and attacking the basket, NWC decided that no way were they going to let Paige beat them. Paige confidently trusted in her freshman teammate, Reigha, who was left open, and passed up the chance to take the game winning shot for a better shot from someone else. Reigha released the ball with one second to go on the short clock and ball goes through the net with the shot clock at zero. NWC had one more last second attempt, but came up short. The Mules found themselves in the same place they left last season, except this time, they will be bringing back the vast majority of the team, and are more than motivated to come back with a vengeance."

Mace led the team with 15 points and six assists. All her points were from three point range. Merz added 14 points and 19 rebounds. Niemeyer had 11 points. Miya Kerstetter scored five points. K. Watkins had two points and seven rebounds. Emerald Niemela finished the game with one point.

"That was a blast of a season and the growth was remarkable," Coach Garrett said. "No one saw us getting back to this point, including myself, and that's what made it such a special run. Big things came from tons of different places in different games, which is just a glimpse of what makes this team so scary for next year. Senior Nai'a Freeman will certainly be missed. There are not many kids that would put in the kind of time that she did simply to lead by example. Nai'a wasn't given huge minutes in game, but she was certainly willing to give huge minutes in the gym because that's exactly what this team needed, someone who could lead by example and see a much bigger picture than just what she had to gain. Nai'a will never go down as one of the great basketball players to come out of Wahkiakum but she will go down as one of the great individuals to come out of this program. I can't wait to see her move forward in her life and be a leader in whatever chapter she chooses for herself next."