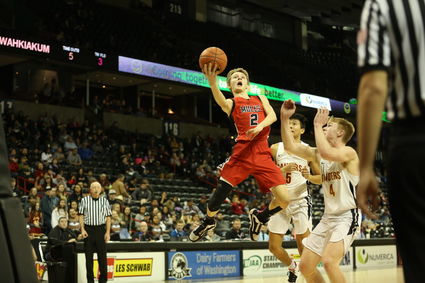 The Wahkiakum Mules boys basketball team's season ended on Wednesday in Spokane when a three point shot with less than two seconds left on the clock put Lake Roosevelt on top 62-59 in the first round of the State 2B tournament.

"For a group of kids with no experience playing in that atmosphere, we came out and played like it was our home gym," Coach Todd Souvenir said. "We played our game, moved the ball and shot with a lot of confidence in the first half.

"In the third quarter, the Raiders extended their defense and got in our face, which caused us some problems. We continued to struggle in the fourth, trailing by as many as nine, but the guys responded and came back to take the lead by two.

"Tied, both teams had opportunities in the last minute but couldn't capitalize, which gets us the to the last seven seconds when they hit a running three at the buzzer.

"It was a gut wrenching loss for all of us, but the guys played one of their best games of the year in the arena, and I couldn't be more proud of them," Souvenir added.

The Mules shot 11 for 23 from the free point line.

"This is a great group of young men that came together as a team," Souvenir said. "The guys really supported and rallied around each other and a lot of that credit goes to our one senior, K.C. Beery. He has been a leader on and off the court for us all year. I am so happy that he was able to be part of getting this program back to Spokane. Losing him will be tough, but at the same time, he has helped build something that will continue for the next few years and we have several great young men that are ready to fill his role.

"The team would like to thank the community for all the support throughout the season," Souvenir added.