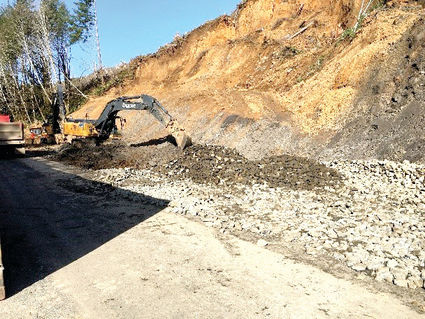 As of March 10, the Washington State Department of Transportation 30-day emergency contract with Nutter Corporation for landslide cleanup and hillside stabilization work along State Route 4 west of Cathlamet ended.

According to a WSDOT news release, during the emergency contract, crews removed most of the slide material, which was approximately 50,000 cubic yards of rocks, soil and dirt, which slid off KM Mountain on Jan. 23. That's enough material to fill more than 3,500 dump trucks and is larger in size than a football field.

Crews also began long-term stabilization work by hauling in quarry spalls, which will be used to build a shear key and buttress into the hillside to stabilize the slope. Quarry spalls are 2"-8" irregularly sized pieces of rocks that are mostly angular, not rounded. Since the rocks are angular, they hold together almost like Legos, helping to lock the mass of rocks into the ground beneath the slide area keeping the area stable.

In the coming weeks, WSDOT will put an additional construction contract out to bid to hire a contractor to build the remainder of the buttress, and finalize other stabilization work, such as smoothing out the rest of the slope, removing more loose debris, and seeding the remaining soil. They'll also install drain pipes into the slope behind the rock, which will help drain water and relieve some of the pressure that can build up. Water is the biggest contributor to an unstable slope like this one. Work along the roadway will likely resume in late spring.

"It is still too soon to tell when both lanes of SR 4 will reopen to traffic," Regional Communications Officer Tamara Greenwell said in the release. "For safety, the alternating single-lane closure will remain in place, around-the-clock until the work is completed.

"Crews have installed seed and mulch on top of the exposed soils at the slide and the disposal site to help prevent erosion, but we will continue to monitor the hillside for erosion and any potential movement behind the shipping containers while we transition to a long-term stabilization construction contract."