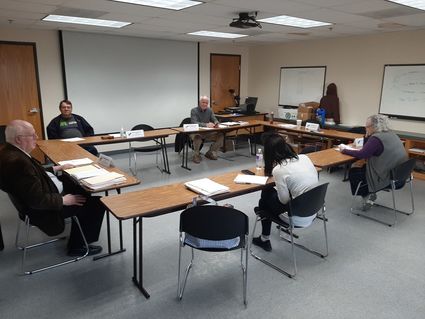 In a meeting kept short to reduce risk of exposure to covid-19 virus, the Cathlamet Town Council met Monday to accept a bid for a water main project and to handle other business.

The council voted 4-1 to accept the bid of Nutter Corporation of Vancouver, $565,239.22, to install new water main along a portion of Columbia Street and SR 4. The bid was under the $680,000 estimate of design engineers from the firm Gibbs and Osborne and $30,000 lower than the next lowest bidder.

Council Member Robert Stowe expressed concern about accepting the lowest bid; he said he was uneasy about the difference in the bid and the engineers' estimate and the second lowest bid. He wanted to have more information about the contractor's record and reputation.

The council later authorized a call for bids for project management engineering.

--The council approved a $50 reimbursement to Council Member David Olson who had, on his own, purchased two used oak seat park benches. The benches will be refurbished and installed at Queen Sally Park and the Elochoman Slough Marina using grant funds.

--The council discussed the need to develop a final design for park development at the Butler Street lot, including installing a strip of asphalt along the wall bordering the Bank of Pacific parking lot. Some of the ground along the wall has contamination from an old leaking underground gasoline tank. Officials hope that if the area is covered with a hard surface they can proceed with development of the lot.

Attorney Johnson said he would obtain a sketch of the proposed cover for state Department of Ecology Review and present it to the council at a subsequent meeting.