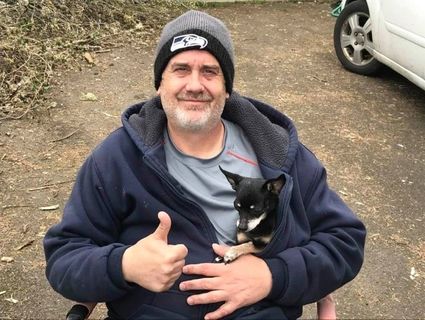 While I had my feet up on my desk reclining in my office chair in deep thought about nothing in particular with my eyes focused on Krsto Novoselic's painting of three ships on the horizon, I was abruptly brought out of my reverie by excitement coming from the living room. The room was dimly lit, and I could barely see that my daughter was holding something in her arms. I was surprised to see her holding a little black and tan Chihuahua. She brought this little precious, but scared little critter into the light where I could get a better look at the dog. This little girl had cataracts and was totally blind. My daughter said that she and her boyfriend were at Greenwood Cemetery in Cathlamet visiting his mother's grave when they noticed this little creature slowly trying to find her way along the inside of the fence. This was in the late afternoon and they both realized that if the coyotes didn't snack on her, then the cold night would take its toll. They went to many houses in the area asking if anyone knew who the dog belonged to, but to no avail. They had no choice, but to bring the dog home. We decided to name the dog "Baby" and keep her as one of the family even though I knew the dog was very old.

The next day while my neighbor was helping us with our goat, she noticed the Chihuahua and mentioned to us that she had seen a post on Facebook announcing that the dog was missing. I went to the web site and saw who posted it and looked up his phone number and was informed by this man that the dog belonged to his cousin.

The dog belonged to a resident of the Greenwood neighborhood, and I was able to deliver his dog to his home. Fifty-seven year old Doug Lofstrom has had his Chihuahua named "Santi" (pronounced Santee) for 16 years. He picked the dog from a litter of puppies his friend had while he was living in Thousand Oaks Calif. Doug moved to Cathlamet in 2004. He told me that Santi has been blind and deaf for the last two years. He told me that the day he lost her he had taken her into the backyard where she could lay in the sun. He said he was busy texting and was in and out of the house. He went outside to give her a snack about 4:30 in the afternoon and could not find her. He thought she might have made her way inside, but nothing. He was frantic now for his friend and immediately went into the neighborhood looking for her. He even went so far as to placing a big sign in his yard announcing that his dog was missing. He stopped two children walking down the street and asked them if they saw the dog and they said they saw a man and woman drive away with the dog. It was one of the longest nights of his life. Would he ever see his Santi again? When he received the call that Santi was found, he cried openly. I'm happy to say that it was very touching to see best friends reunited.

The West End Food Pantry at Johnson Park is open every Thursday from 1-5 p.m. The food is free at no charge. Due to the covid19 outbreak all food will be given as curbside service. A list of items that is available that day can be filled from a list out in your car and the volunteers will bring it to your car. Those who can't make it to the food bank can have it delivered to their home between 1-2 p.m. It is necessary that you call the food bank first between 10 a.m. and noon at 360-465-2344. For more information contact Shonda Ware at 360-465-2722 or Toni Fest at 360-465-2393.

Even though Grays River Grange is not meeting regularly, Grangers are still busy with community service projects. The current project, for the sewers amongst us, is making washable masks. Wearing masks is now recommended for everyone when you do have to leave home. Wearing masks is not only to protect ourselves but to protect others in our community. These masks are available for community members by contacting Grays River Grange at https://wwest.net/webmail or any Grange member. We do remind everyone that staying home is the best defense against the virus. The Grange would also like to express appreciation for all those essential workers that are keeping us healthy, safe, and fed. Be safe-stay home-wear a mask.