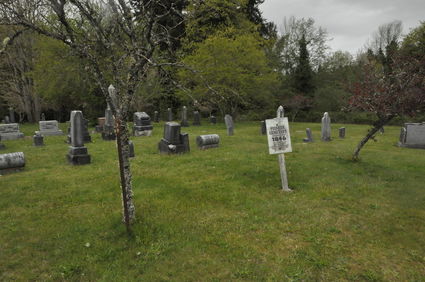 The Town of Cathlamet is seeking grant funds to make improvements to the Pioneer Cemetery, which has markers for the graves of the town's first white residents

A shorthanded Cathlamet Town Council authorized a lease of the Pioneer Cemetery and application for a grant to refurbish their grounds when they met in an online meeting Monday.

The council also handled other business including approving a grant application for electronic vehicle charging stations, contracts for water main construction on Columbia Street, and discussions of finance and park and system maintenance needs.

Council Members Paige Lake and Robert Stowe were excused from the meeting for personal reasons.

Council Member David Olson is spearheading the effort to refurbish the Pioneer Cemetery. He and Council Member Bill Wainwright met a few weeks ago with members of Cemetery District 1, who own and maintain the site to talk about the town taking over the cemetery, which has graves from the town's founders. Olson and Town Attorney Fred Johnson subsequently met with cemetery district officials to develop the agreement and prepare the grant application. They developed a lease agreement, and that appeared on the agenda before presentation of the grant details.

Wainwright expressed several concerns about the lease. First, he asked why a lease was proposed instead of a quit claim deed from the cemetery district that would give the town ownership of the land. He pointed out that, under the lease, the town and cemetery board would have to agree in advance on major maintenance and improvements.

"They want to know where this is going," Johnson said. "I can't speak for them; I don't represent them, but I think they feel a responsibility for the cemetery."

He and Olson added that the grant application is due Thursday (today) and there wouldn't be time to work out a quit claim deed, and as Olson explained, the town has to show control over the parcel in order to qualify for the grant. A quit claim deed could be developed in the future, he said.

Wainwright also suggested the grant isn't necessary, for volunteers could undertake the improvements.

Olson disagreed, saying professionals would be needed to clean, repair and reset the grave stones, many of which are broken or stand at a lean. The grant would also finance signs, fencing and other improvements.

Next, Olson presented details about the grant application, saying the previous discussion would have been quicker if the grant details had been presented.

The grant would total $45,000, with the town responsible for $30,000 of that total (this has been corrected; first publication transposed the town and funder's share--editor).

Wainwright suggested the grant request should be more. Olson replied that the amount could be increased at final submission of the application.

Olson added that in his talks with the Washington State Historical Society, society members were very encouraging. The cemetery has significant historical value: It holds the graves of the founding James Birnie Family, and it includes a grave attributed to the chief of the Wahkiakum band of Indians, a rarity of an Indian grave in a white settlers' cemetery in the 1850's.

A motion came to approve the initial grant application, and it passed 3-0.

--The council voted 2-1 to support an application for funds to install electric vehicle (EV) charging stations.

The application would finance level 3 chargers, which can charge a vehicle in as little as 30 minutes.Wahkiakum PUD General Manager David Tramblie has been working on a similar application for the PUD and estimated the town's project would cost around $156,000, with the town responsible for $31,247. The estimate is on the high side to account for surprises, he said; the actual cost could be lower.

Wainwright asked if the stations were designed for Tesla vehicles, and it would be cheaper to install level 2 stations, which take a couple hours to charge a vehicle.

In the end, Olson and Waller voted to proceed with the application, and Wainwright opposed. 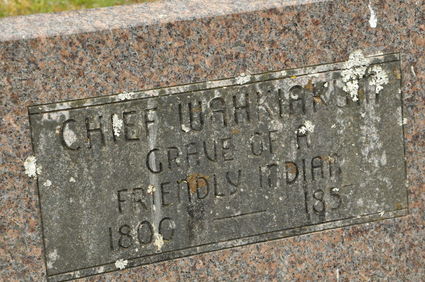 The cemetery includes the grave of the leader of the local band of Chinook Indians.

--Votes were unanimous to approve a contract with Nutter Construction for water main improvements on Columbia Street and for the Gray and Osborne, Inc., engineering firm to be the town's contract manager.

--Toward the end of the meeting Wainwright asked that the council and staff address the town's capital improvement plan, written by Gray and Osborne in 2015, and address necessary projects.

Public Works Director David McNally said he would work with Waller and Gray and Osborne to present an analysis at the council's mid-May meeting.

Wainwright also commented on a report of needed improvements at Erickson Park.

"There's a lot of work to do there," McNally said. "It will have to be done in phases."

The focus this year would be restrooms, he said, and vegetation maintenance.