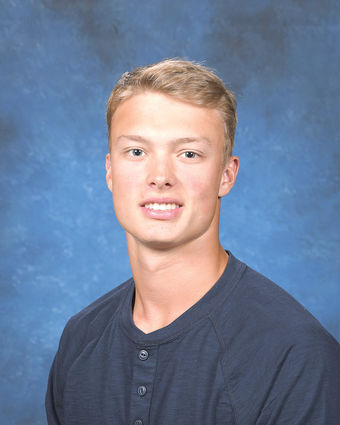 Ethan Lindstrom has several athletic awards to his name. Now he can add an academic honor as well: Valedictorian for the Naselle High School Class of 2020.

Lindstrom's final season of baseball was cut short by the pandemic, but in his career as a Comet, he was selected to All-State teams in football his junior and senior years, All-State First Teams in basketball his senior year, as well as the State 1B tournament team, and the Coaches Association 1B First Team. He was named the Coastal League's MVP in baseball his junior year.

That's not an exhaustive list, but it's evident that Lindstrom is a gifted athlete. His first love is baseball, which he will continue to play next year thanks to a baseball scholarship at Linn Benton Community College in Albany, Oregon.

"It's my best sport and my favorite sport," Lindstrom said. "I've been pursuing it for awhile."

Lindstrom is mainly an infielder and a sometime pitcher, but he is comfortable in the outfield as well. If pressed, he likes to take the position between second and third base, as shortstop.

But you can call him a utility player.

He was involved in Knowledge Bowl for three years, and was a student leader as well.

Lindstrom didn't have a favorite teacher, but he really enjoyed the hours he spent in wood shop.

"That was a lot of fun," he said. "We made a lot of things I liked in there. My last big project was a fishing pole holder. We put it in our house. It took me a long time and it works good. That was probably my favorite project."

Lindstrom isn't certain what the future holds, as far as a career, but business and education currently sit at the top of his list.

"I have a lot of different options," he said. "I haven't had my heart set on one. I like those two fields, so we'll see how that goes. I'm sure I'll find something I'm interested in while I'm getting my Associates Degree."

Adjusting to life in a pandemic has been a strange experience for everyone, Lindstrom included.

"It's just kind of weird doing everything online at your house," he said, "I'm not usually very good at focusing at my house, but thankfully work hasn't been super hard. Teachers have been pretty understanding. I have a lot of time on my hands, trying to find things to do."

Which has made him grateful to be living in the country.

"We're pretty fortunate," Lindstrom said. "If you lived in an apartment in the city, that would suck. I've been doing the same things I usually do for fun. Hunting, fishing, kayaking. Working too, doing side jobs, mowing lawns and stuff."

The Naselle Class of 2020 is pretty small, but according to Lindstrom, they weren't very close. Luckily, he found camaraderie on the field and on the court.

"Our class has always been one of those classes," he said, "where everybody has their own things going, but sports wise, we were pretty tight."

Ethan is the son of Emily and Randy Lindstrom of Naselle.