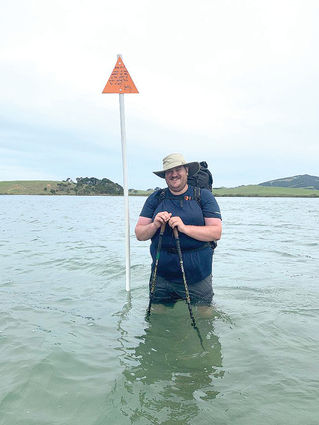 Cathlamet resident Paul Tillman is back at his post at the Cathlamet Market and as a volunteer with the Cathlamet Fire Department, but if you are like me and noticed his absence, he's been on a bit of an amble.

Last fall, he headed home to his native Minnesota to spend a week with his family before stepping on a plane to New Zealand to complete his third through hike.

"It was actually kind of nice," Tillman said. "It was our fall, but since I went to the southern hemisphere, it was their spring. I went through their summer and to fall, and then I came back to our spring. I completely skipped winter with this trip."

Tillman has a love/hate relationship with through hikes. He completed the Appalachian Trail in 2013 and the Pacific Crest Trail in 2015. It was time to take on another challenge.

"My first trail, I'd gotten laid off from work, and I was really angry," Tillman said. "So I took my severance package to cool off and hike the trail. I got done with the first one and I thought, I'm never doing that ever again. A few weeks later I was planning the next one."

"They are incredibly physically taxing and mentally draining," he added. "It is simultaneously the worst and best thing I've ever done. You get done and you think I'm never going through that hardship again. And then you think, oh, that was so awesome, I miss it!"

After flying into Auckland, Tillman spent a little time in the city setting up a bank account and getting everything lined up for the big adventure. And then he took a series of double decker buses to get to the northern tip of the northern island, where the Te Araroa Trail begins, at Cape Reinga.

"These trails are so long," Tillman said. "In the US, I might spend a week in the desert, or two weeks in the mountains. But here I'd wake up on the beach, go through a jungle, walk through a pasture land, eat lunch, go up a mountain, back down to a beach, and then through prairie land where I'd camp. The terrain would change by the hour."

"It was awesome and beautiful, but difficult to plan for, because you need different equipment for each situation," he added.

"It was definitely a level above trails I've done in America, as far as preparing for weather," Tillman said "If you think the weathermen here are terrible at predicting the weather, they are amazing compared to the people in New Zealand."

Some of his favorite hiking included the day he hiked up the side of Mt. Doom from Lord of the Rings, really named Mount Ngauruhoe, or the time he spent traveling through the Tararua Range.

"Supposedly you've got winds coming in from four different directions in the Tararua Range," he said, "so the weather can change every 15 minutes. On my way out, I'm looking at this incredibly beautiful sky, except for this one cloud, right over my head. It was hailing."

One day, he met a woman who brought horses into the Tararua Range to find missing people. She told him that a lot of people had died there, and that every time it happens, a hut is built. Tillman counted 22 huts on the section of trail he chose to travel.

"There were signs, do no walk through this section alone," he said. "It was super beautiful, one of most favorite sections of the trail. Incredibly hard hiking. I was making maybe seven kilometers a day in some of these sections."

It must have been difficult hiking. For comparison, he said he once did 30 kilometers on a beach, with two bar stops, and thought afterwards that something must be wrong with his GPS. It had not been a taxing day.

"There are a lot of river crossings in New Zealand. A lot more than the other trails," Tillman said "Towards the end of the trail, I slipped on a muddy bank on a rainy day and ended up rolling down the hill and busting my trekking poles. I was fine. Of course, it was the only time I saw people, and I fall down the hill in front of everyone."

"I continued on, kind of salty," he said. "I'm hiking and going across this river, and I start slipping on some rocks. I'm taking my trekking pole and I'm trying to set it into the ground to catch me, but it's broken. I ended up crashing in the river."

It was not his day, but it might not have been the worst thing.

The poor guy had some intestinal trouble while walking back through Auckland as he headed south on the trail. He was in the industrial area, and couldn't find a public restroom anywhere.

"I'm running," Tillman said. "I get to a gas station and ask to use the bathroom. They tell me it's employees only. I offer the guy $40, but he says nope."

Tillman keeps running. What else can he do?

Suddenly, he finds himself in a more suburban area, and spies a running track.

"I know there's a public bathroom there," he said. "I'm running, and stopping, and then running again. There is a park adjacent and all these parents are looking at me like I'm crazy."

"I get to the bathroom there. I barely make it, photo finish," he joked.

"The public bathrooms there are like the future," he said. "They are automated and timed for 10 minutes so you can't spend the night in there. Normally that's enough. But 10 minutes are up, and the doors are opening, and there is that park right to the side. I'm mortified."

The base weight for his pack was 17 pounds. That was without food or water, so how much he carried depended on how many days he was out on the trail at a time.

Parts of the southern island were a really long hitch because it's so rural, Tillman said, but on the north island, the longest stretch might be a day or two out and then you were back in a town.

"There is always wear and tear on your equipment on these long trips," Tillman said. "And this one was so rugged, it felt like my gear was getting torn up faster than on my other ones."

He dealt with a hurricane and when a volcano erupted, he happened to be sitting on another volcano. An alarm went off, as warning, because the volcanos were part of a chain, and there was concern that something could happen.

We should be fine, someone told Tillman, but if you see me running, you should probably follow me.

Between the north and south islands of New Zealand is a ferry ride.

"It looked like a cruise ship," Tillman said. "The trip took several hours. There are famously horrible swells there and I was sick as a dog the whole time, but the worst part was that the ocean was really calm that day."

Usually Tillman makes friends early on these hikes, and finishes alone, but this time, it was the other way around.

"I ended up meeting a good group of people about halfway through the souther island and we hiked about the same speed," he said." They were from all over the place. There was a girl from Virginia. A girl and two guys that were from London, and another girl from Germany. We still Facechat now and again."

Tillman started to laugh at a memory of two of his new friends. One of the guys from London planned to propose to his girlfriend, but the romantic gesture might have been spoiled by something called hiker hunger.

"He was sweating," Tillman said. "She was sitting there eating her chips, and he is telling her all the reasons he loves her, and she doesn't slow down her chip eating at all. All the sudden he gets down on one knee, and she's got a mouthful of chips, with her hand coming up to her mouth with more chips."

Tillman started hearing about the pandemic while he was on the trail. It was hard to make sense of toilet paper shortages, and the other things he heard about, but he figured he'd deal with it when he was done with the trail.

Then his friends flights out were getting canceled. Suddenly the gravity of the situation became very clear. 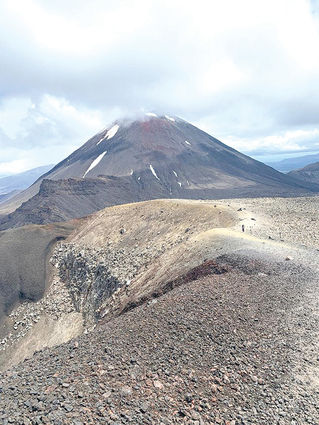 The trail ended in Bluff. It probably would have been a horrible day, walking along the shoulder of a busy highway in the hot sun, he said, but he and his friends were incredibly excited.

"They give you a medal for completing the trail," he said.

He spent his last week with his new friends, enjoying campfires, surfing thanks to a local, then renting a minivan to travel to tourist spots and on to Queenstown, where he flew to Auckland, and then on to Los Angeles, and home.

The trail is 3,000 kilometers long and took Tillman about five months to complete.

Is he thinking about his next thru hike? You bet.