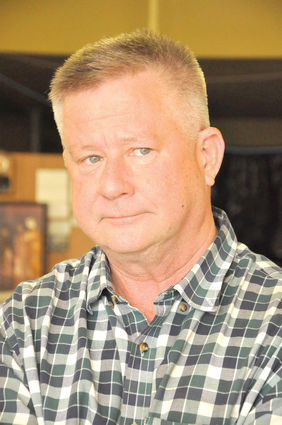 Tim Lawry moved to the Elochoman Valley in 2018, and is now running for Wahkiakum County Commissioner, position 2, against incumbent Dan Cothren.

Lawry spent 23 years on active duty with the Army, as an aviator, flying helicopters and cargo category aircraft, he said. Afterwards, he applied and was accepted to law school in 2012, and went on to pass the bar exam in Maryland on his first try. He was an acquisition professional at a senior level, defending budgets to Congress for the Army.

A Portland native, Lawry decided to return to the area to be near his kids after he retired from federal service.

"I didn't want to go back to Portland, and my daughter and grandkids live in Vernonia," he said. "I looked at this place, and did the math on the cost of living. I liked the demographics and the neighborhood was fabulous, there isn't another neighborhood like this in the county."

Lawry is licensed to practice law in three state jurisdictions and three federal, he said, and has considered himself a general practitioner of family law, contract law, and taxation. He continues his bankruptcy practice, and is especially interested in zoning and land use planning.

"That is why I sort of got interested in the political atmosphere in the county," Lawry said. "The county is going to grow no matter what, because the population is always growing."

"Now we've got this situation with the covid virus, and people departing the population centers in droves," he said. "Guess where they're coming? We've got to be ready for that kind of growth, and from what I can see from the county commissioner's agendas, it's really not addressing that sort of growth."

"If growth is not rationally managed," Lawry continued, "it's like having a garden. If you don't rationally manage it, you get a bunch of weeds. The objective is having a beautiful community like this in the long term, and I think a little more thought needs to go into it."

"This is a boutique community. It's very beautiful, very quaint," Lawry added. "I'd love to see that saloon reopen. I'm very enthusiastic about the opportunities here for growth and to expand the tax base, and expand the rational infrastructure that is required."

"There are three streams of revenue," he said. "There is state revenue, federal revenue, and there is tax revenue, like property taxes and all that kind of thing. All that revenue has to be balanced with the type and quantity and quality of infrastructure that is required to serve the people. That has to be done on a rational basis. If there are shortfalls, you have to prioritize. The goal should be rational growth so that your tax base will increase without having deleterious effects on the environment, and when I say environment, I say the living environment as well as the natural resources. Because the beauty of this county is its beauty, and if you don't manage its growth correctly, it will become Longview."

"My experience as a program manager of major Army programs, will certainly inform me, as soon as I get the facts in as to how that works," Lawry said.

There aren't really any other major issues that are on his mind, but he had this to say:

"I think the relationship between the community and the sheriff's office is great," Lawry said. "As far as racism, there may be some issues, but I haven't witnessed any yet. In the County Health and Human Services, they counted eight unsheltered homeless. One is bad, but compared to Cowlitz County, it is not a problem."

"I just got here, and took a break," he said. "And found out what the lay of the land was, and now I'm ready to participate."

Lawry enjoys building boats in his spare time, and is currently building a 21 foot Chinook in his shop.