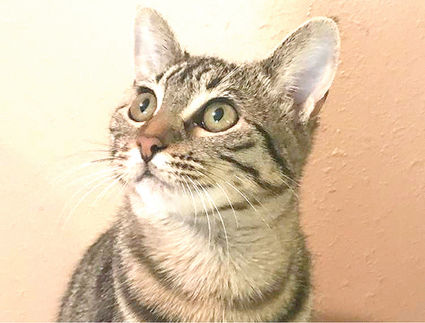 In a previous article in The Wahkiakum County Eagle, I wrote about the importance of cats in the county. This story was partly inspired by the feral cats I saw at Deep River Camp and because my daughter rescued a European Shorthair cat that was already trained to use the litter box. This breed of cat is believed to have originated in Sweden and was found to be very common as well in Finland before being seen across the United States.

I remember a scripture in the Bible from Sunday school that says if you train a child in a way he should go then when he is old, he will not depart from it. It made me wonder if this would also apply to cats. I know that may sound odd, but when something the cat does one time, it is no big deal; however, when I noticed this on a regular basis, I now pay attention. I would let the cat out to go play or do whatever it is that cats do and after several hours she would want to come inside. All cats do this, but this cat comes in for basically one reason and one reason only, to use the kitty litter box.

With lots of time on my hands I decided to follow the cat or just sit and watch her antics. I never had a pet in my life, and this wonderful creature has made me her pet. If aliens came to earth and saw humans walking their dogs, or rather their dogs pulling them, and saw the owners picking up the dogs feces, they would be more likely think the dog is in charge. Cats are no different, or are they? They do really funny things I was clueless about.

My cat named Pepper is very playful and energetic and uses up all her energy by darting from room to room, jumping up and down on the furniture, and going a little crazy. I have come to understand that when the cat hits me with her head, she is saying she loves me. This is her way of letting everyone know that I belong to her. I guess I'm the cat's pet. It is the pheromones in her cheeks that mark me as her possession. I have watched Pepper chattering with excitement while watching the birds flying around the yard. The sound she makes I realized comes from her excitement at seeing potential prey and the frustration of not being able to get at them.

I have wondered why Pepper likes to sleep in small hidden spaces. She tore the lining under the box springs to my bed just so she could have a quiet place to sleep. I now see that she does this to feel cozy and secure. At times she even prefers these places to a comfy pet bed. This type of behavior can be traced back to their feral descendants who would instinctively sleep safely hidden away to avoid predators.

I know that cats are infamous for leaving us unwanted gifts, and Pepper is no different. Cats like to leave us things such as dead mice or birds. Pepper has already adorned us with a mouse and a mole, neither of which she ate. This was her way of thanking the family who rescued her for all we did for her. I'm honored she wanted to share her spoils with me, but I certainly will not praise her for it because I could end up with more gifts.

The last odd behavior I witnessed the cat do, I find out that it is actually quite common with cats. Pepper likes to drink water straight from the tap. She jumps up into the sink and waits for me to turn on the faucet. She was using the kitchen sink at first, but I do not want the cat in the kitchen, so she uses the bathtub faucet. This behavior probably came from their feral ancestors. It is safer for cats to drink running water. Water from a stagnant source is more likely to contain bacteria and other contaminants. I don't mind Pepper taking an occasional sip from the faucet, but not at three in the morning.

We gotta love our kitty's and doggys. Where would life be without these loyal fur friends?