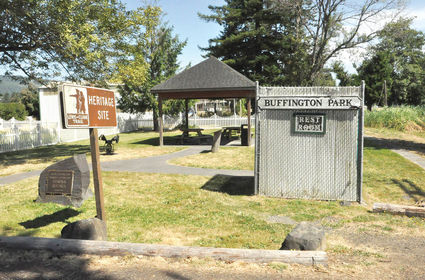 Public restrooms like this at Buffington Park on Puget Island are few and far between on local roads and highways. Local officials have started considering what can be done to increase the number of public facilities.

Members of Wahkiakum County's board of commissioners would like to see an increase in public restrooms available to travelers.

On Tuesday, they explored the concept with representatives of Port District 1 and the US Fish and Wildlife Service. All agreed this would be a long-term project and that they would see what each could offer to the project.

In other business at the board's meeting Tuesday, commissioners accepted the resignation of another member of the county planning commission; they discussed issues about erosion of the lower portion of East Sunny Sands on Puget Island, and they wrote a letter to the state fish and wildlife commission supporting proposed changes to the Columbia River Harvest Policy of the Washington Department of Fish and Wildlife (WDFW).

Discussion on installation of a public restroom along SR 4 revealed a host of hurdles to overcome.

Commissioner Mike Backman has spurred the conversation, urging location of a facility at the Hansen National Wildlife Refuge viewing area off SR 4 between Cathlamet and Skamokawa. He would like the county to work with other agencies to add a highway restroom.

Jackie Ferrier, manager of the US Fish and Wildlife Service (USFWS) Lewis & Clark refuge complex, said location of a restroom there would be a long term project.

It would also be expensive, she said. The agency has a public restroom on SR 101 west of Naselle, and it is expensive to maintain and subject to continual vandalism. At this time, the restroom is closed.

"On our refuge [which includes sites on Willapa Bay and in the Columbia River], all restrooms are closed because we don't have resources to keep them open under [coronavirus] guidelines," she said.

Jackie Lea, manager of Port District 1, said the annual cost of cleaning and maintaining restrooms at the Elochoman Slough Marina and County Line Park is approximately $33,000. Like the USFWS restrooms, the facilities experience lots of vandalism. In addition to the cost, it has become hard to find people willing to maintain the facilities, she said.

"I would caution about putting in a facility that you have to maintain," she said.

Portable toilets are more affordable but still costly. There are now two at County Line Park, Lea said, and pumping them weekly runs $255 per month.

Backman commented that the county should support an effort to increase the number of facilities.

After more discussion, the parties agreed to do more research to see what funding and support could be available, from the Washington State Department of Transportation, for example.

Ferrier commented that a decision for a facility on refuge property would take time for a risk analysis and then a decision by her boss, the regional manager.

"I can research on my end if it's even a possibility," Ferrier said. "My gut feeling is that this is not the time to ask for this."

Commissioners accepted the resignation of Jason Wills from the county planning commission.

He is the third planner to resign this year. Two others, Colleen Healy and Trudy Fredrickson resigned after the county commission overruled a planning commission recommendation to reject a permit application from Wahkiakum PUD to improve a Skamokawa water system.

Cothren said he had attended a recent planning commission meeting and discussed issues with the planners.

"We need those folks," Cothren said. "We like their advice, but we have the final say."

Backman said he received communication from Puget Island residents wanting the county to press for beach nourishment at the lower end of East Sunny Sands.

The county has arranged for placement of dredged sand further up the beach, but the US Army Corps of Engineers has opposed the sand placement in the area close to the ferry landing because the sand could erode into the ferry channel.

Cothren has been the commission's liaison with the Corps; he said Corps officials are adamant that they don't want sand eroding into the ferry channel where it would have to be dredged again.

The area will have to have shoreline armament instead of sand deposit, Cothren said, adding that Corps officials have said they would support that plan.

Backman suggested the project could include, first, beach nourishment and, later, armament.

"The bottom line for the Corps is, 'Does it benefit the shipping channel,'" Cothren said. "Chuck Beyer and I bring the area up at meetings. We're working with our congressional folks and we'll see what we come up with."

Commissioners approved a letter to the state fish and wildlife commission to support changes to the Columbia River Harvest Policy.

The policy changes will be considered tomorrow (Friday) at the meeting of the state fish and wildlife commission. They would ease some of the restrictions on the commercial fishery imposed by the Kitzhaber Plan, which was found to have adversely impacted commercial fisheries. They would also ease requirements for recreational fishers to use barbless hooks, among other changes, and they would generally modify the split of catch allocations to increase slightly the commercial share, depending on targeted species and projected run size.

"We recognize that other sectors of the State of Washington may be benefitting from recreation fisheries under this policy, that their benefit has come at a very steep social and economic cost to our communities," the letter says. "We believe it is time to rebalance allocation of the salmon resource to provide opportunity again to our local fisheries, both commercial and recreational, and restore this economic mainstay that has long been a valued part of our heritage."