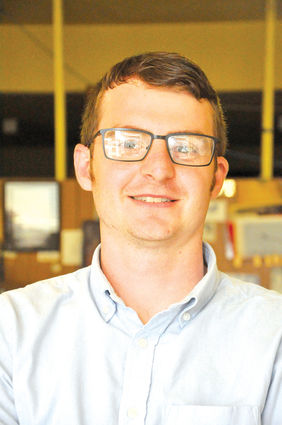 Former Cathlamet resident Andrew Weiler has returned to town and joined the staff of The Wahkiakum County Eagle as a product developer.

Weiler graduated from Wahkiakum High School in 2010, earned a bachelor degree at the University of California/Santa Cruz, and this year, a master's degree in media development and innovation.

As a part-time employee of The Eagle, he will focus on business development and provide local resources and news coverage of COVID-19 on The Eagle's website. Readers will also see his byline on some news articles.

Weiler is an entrepreneur who has specialized in digital story producing for commercial, documentary and feature films. His core focus is to advance civic engagement and strengthen community identity through innovative journalistic methods. He believes that a human-centric approach to business and audience development is how independent newsrooms can sustainably provide desirable, viable and feasible offerings.

In 2016, Andrew graduated from the University of California, Santa Cruz with Bachelor of Arts in Film and Digital Media. His interest in non-fiction storytelling in particular inspired his pursuit of documentary filmmaking in Chicago. A summer internship with Kartemquin Films, a powerhouse documentary producer and incubator, provided Andrew opportunities in a variety of roles to tell human-centric and social-impact stories.

Weiler was hired as an operations manager for another documentary producer, Kindling Group, where he started an immersive internship program and oversaw all organizational functions. However, Weiler said that three years in the documentary industry was surprisingly unsatisfactory because of the inaccessibility of the medium – its technology, funding and process – to independent filmmakers.

In response to documentary's limitations and because of a personal interest in serving underrepresented and underserved communities, Weiler has shifted to journalism. He believes that the medium of journalism can more efficiently address the information needs and be a watchdog for small towns.

Weiler's master's degree program at Northwestern University's Media Entrepreneurship and Innovation through the Medill School of Journalism focused on media product management, start-up business models, web development and design for local news. He interned with an online local newsroom and start-up, Berkeleyside, performing market research, business development support and human-centered design to supplement the newsroom's planned expansion into other cities. He has returned to that job as well as his position at The Eagle.