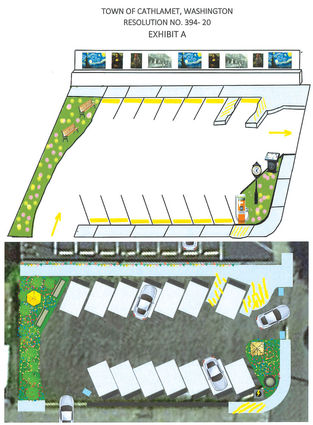 By a 4-1 vote, members of the Cathlamet Town Council adopted a conceptual plan for developing their parking lot at the corner of Main and Butler streets when they met Monday.

Among the other items of business addressed at the nearly four hour long meeting, the council agreed to prohibit mooring on the floats at the town dock; they tabled a decision on a proposal to invest surplus town money in bonds; they scheduled discussions on possible changes to sewer and water rates and on ordinances concerning dangerous dogs; they approved a right-of-way easement for telephone utility work that will close streets at times, and they heard a crime statistics report from Sheriff Mark Howie.

The town acquired the Butler Street lot two years ago in a process that generated controversy over transparency and cost of the lot. Late last year, as terms of office for three council members ended, the council voted to restore parking in the lot (which had been prohibited) on condition that a plan for development of a park be developed by August, 2020.

Following a July council meeting, Council Members David Olson and Laurel Waller--the two holdovers from the previous council--met as a committee to develop the plan, and they presented it at the Monday meeting.

"I've been here since the beginning, and I've had lots of concerns, including transparency and the value for the property," Waller said. "The long and short of it is that we own this now."

She reminded colleagues that in public comment, maintaining parking was a popular feature, not just development of a park.

"I hope you will support it so we can go to the next phase," she said.

A decision to move to the next phase proved to be difficult.

Council Member Paige Lake said she couldn't support the plan because it appeared to bind the council to installing amenities that could be very costly, and she disagreed with the potential funding sources the plan identified.

"I don't want to use the general fund because we don't know what's in the future," she said.

Council Member Bill Wainwright echoed Lake's concerns. The wording of the proposed resolution to adopt the plan was too specific, he said.

Olson and Waller replied that the proposed plan was just conceptual and could be modified as needed and funding sources were identified.

"Part of the next step is to get real," Waller said, "to see what the costs are, to consult with engineers and the Washington State Department of Transportation."

After considerable discussion, Olson and Waller agreed to Wainwright's suggestion to amend the title of the resolution to state that it would set forth a "budget and development concept plan" for the lot, thereby emphasizing the conceptual nature of the plan.

"I still don't want all the specifics in there," she said.

After hearing a report from Wainwright about deterioration of the two floats at the town dock, Stowe, serving as mayor pro tem in the absence of Mayor Dale Jacobson, ordered the floats closed to access or moorage, and Wainwright was authorized to pursue repairs to a maximum cost of $1,000.

Following discussion of the situation at a July meeting, Wainwright engaged the services of a diver to inspect the floats under water. The diver reported that the protecting cover on the bottom of the float showing the most instability had broken apart from wave action, and it appeared that animals such as otters had burrowed into the flotation material. The underside of the other float was beginning to break up, too, the diver said.

The floats are unsafe to use, Wainwright said, and they either need to be repaired or replaced.

Town Attorney Fred Johnson suggested investigating repairs, for that falls under the permits the town obtained to work on the dock and floats. Otherwise, a new permit process would have to start in order to install new floats. State law gives the mayor authority to order emergency action in cases involving public safety, Johnson said.

After discussion, Stowe authorized Wainwright to work with town staff to install a barrier to prevent people from mooring to the floats and to investigate how the floats could be repaired and what that would cost.

Harrison Stenberg of the Seattle firm Time Value Investments, Inc., presented a proposal for the town to invest surplus funds in three bonds.

In discussion, Wainwright pointed out that bond interest rates are now very low. "I can't see buying callable bonds at the bottom of the rate market," he said.

After 20 minutes of discussion, Stowe said the council needed further information, and the council voted to take the matter up at a later meeting.

At Waller's suggestion, the council agreed to have a workshop at their first meeting in September about sewer and water rates and how the sewer system could add more customers. The previous council had started looking into the issues, she said, but left further action to the current, new council.

Wainwright also brought up other old business--action on the town's dangerous dog ordinances. The council had been ready to act on the issues earlier this year but postponed action because of restrictions on the size of gatherings because of the coronavirus.

Clerk/Treasurer Sarah Clark said she would add the issue to the council's August 17 meeting agenda and publicize how people could attend and comment via the Zoom online platform.

The council also approved a request from CenturyLink to do some trenching in order to install new fiber lines on Main, Columbia and Spring streets from August 10 to August 31. Streets may be closed at times.

Also, Sheriff Mark Howie gave a report on crime statistics for the county and town, which contracts with the sheriff's department for law enforcement services.

Howie said that calls for service declined dramatically when the coronavirus hit the state, but after some time, activity increased, and the 2020 levels are similar to levels of activity at the same time in 2019.